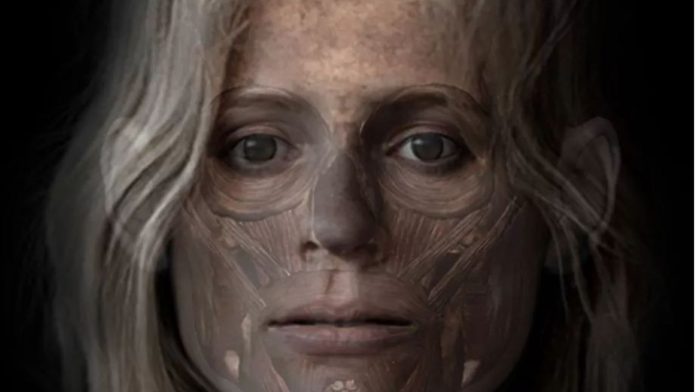 Watch the video: 700-year-old faces painstakingly recreated – this is what people looked like in the Middle Ages.

It’s been more than 700 years since these three people were dead – researchers have now succeeded in reanimating their faces.

In 1957, construction workers stumbled upon three stone coffins near a medieval crypt in Withhorn, Scotland.

Dozens of tombs containing human remains are gradually being uncovered during excavations at the site.

But how did people look and live in Scotland at that time?

“These reconstructions are an excellent opportunity to reflect on who these people of our past really were about their daily lives, their hopes, their beliefs”. Trust development manager Julia Muir Watts.

Researchers are digitizing the faces of three people who lived in the Middle Ages: a bishop, a young woman, and a priest.

According to researchers, they lived in the county of Wigtownshire between the 12th and 14th centuries and were buried in the Dumfries and Galloway area.

Based on radiocarbon dating, artifacts, historical records and isotope analysis, archaeologists and forensic scientists identified a body as that of Bishop Walter.

The bishop appears to have been buried prominently – his skeleton shows signs of obesity.

The woman could not be identified by the researchers.

However, their head is very symmetrical, which, according to scientists, indicates a particularly beautiful appearance.

She died in her twenties and was buried on a bed of shells.

The identity of the Maulvi is also not being recognized.

But recreating his face posed a “unique challenge” to the researchers because of his cleft palate and asymmetrical face.

But how do you actually reconstruct the faces of the Middle Ages?

Archaeologist Adrian Evans makes a 3D scan of the skull.

Forensic artist Christopher Rin then uses 3D images to reproduce the faces of all three bodies as realistically as possible.

“This includes the use of facial soft tissue, custom-sculpted muscle to fit each skull, and scientific methods of inferring every facial feature from skull morphology, such as the eyes, nose, mouth, and ears,” says Christopher Rinne. .

Shirley Curtis-Summer is an archaeologist who conducts isotopic analysis of burials.

Isotopes are the atomic types of an element that each human takes in from birth through food, air and water and thus have an individual isotope signature.

Isotope testing allows researchers to analyze the body of the deceased based on where he or she lived.

“This project is very important because although we may never tell the full story of the lives of these medieval people, being able to reconstruct their diet, mobility and now their faces allows us to go back to their past and come face to face with them. Allow. Meet.” Shirley Curtis-Summer.