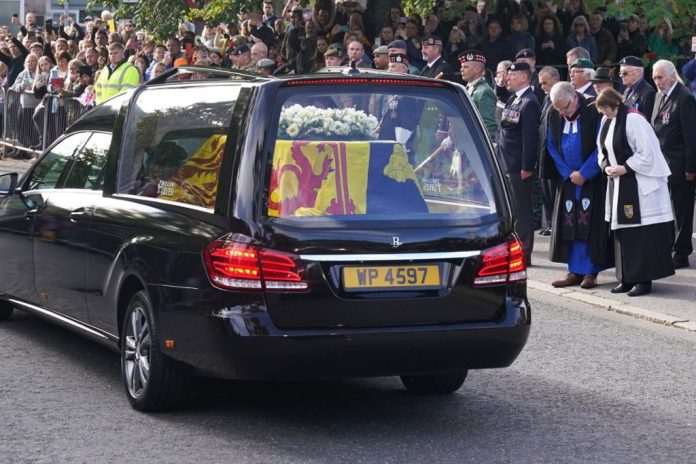 The funeral procession to the south, which under other circumstances would have actually taken about two and a half hours by car, lasted about six hours and passed through the cities of Aberdeen and Dundee, among other places. In the afternoon the convoy reached the Royal Residence Palace of Holyroodhouse. Her daughter Princess Anne accompanied the coffin in a second car, and the Queen’s sons Prince Andrew and Prince Edward were there on arrival.

Hundreds of bouquets of flowers at the palace gate

The royal standard for Scotland was draped over an oak casket visible through the carriage windows. On this rested a wreath of plants native to the royal estate: dahlias, phlox, fir, white heather and sweet pea – one of the queen’s favorite flowers. Hundreds of bouquets of flowers that people had kept there lay at the gate of the palace. Hours before the departure, hundreds of people had gathered along the route, some equipped with camping chairs, to pay their last respects to their queen.

Traditionally, the Queen retreats to her Scottish country estate in the summer, this year she intends to stay for about two months. She did a lot of hiking in the Highlands, interacting with local residents and tourists alike. He was considered a neighbor by the residents of the nearby town of Baltar.