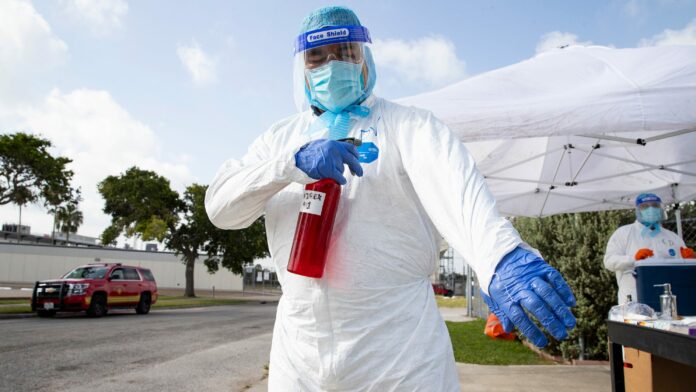 The WHO and over 200 medical experts agree with new research that shows COVID-19 could be carried by cough droplets and travel up 26 feet.

The world hit yet another grim milestone on Saturday in its fight against the coronavirus pandemic as the global death tally surpassed 600,000, according to Johns Hopkins University.

Of the 188 countries tracked by the university, only 17 have not yet reported a virus-related death. The United States has the highest number of fatalities and is the only country reporting more than 100,000 deaths.

Confirmed cases of the virus have doubled globally since early June, according to data from the university. If deaths – which often lag weeks behind cases – follow a similar trend, the virus could become one of the top 10 global causes of deaths in coming months.

Leading causes of death globally – including tuberculosis, road injuries, stroke and heart disease – kill between 1.2 million and 9.4 million people in a year, according to 2016 data from the World Health Organization .

📰 What we’re reading: Labs are performing more COVID-19 tests than ever, lab workers are strained and states are bidding against one another for the same, limited supplies. A lack of a federal plan is leading to testing delays.

About 85 babies are among the thousands of people who have tested positive for COVID-19 in one Texas county since March, Nueces County public health director Annette Rodriguez said Friday.

“These babies (have) not even had their first birthday yet — please help us to stop the spread of this disease,” Rodriguez said in a press conference.

The number of children younger than one who — at some point — were diagnosed with the virus would amount to about one percent of the area’s total cumulative cases, which as of Friday totaled 8,176.

Early data from the U.S. Centers for Disease Control and Prevention published in the spring found that infants made up less than 1% of cases nationally.

Although children are believed to be at a lower risk for the virus, infants “may be at higher risk for severe illness,” the U.S. Centers for Disease Control and Prevention warns.

In an online lecture Saturday, United Nations Secretary-General António Guterres warned the world that the pandemic has exposed “the fragility of our world.”

“COVID-19 has been likened to an x-ray, revealing fractures in the fragile skeleton of the societies we have built,” he said, referencing widespread economic inequality and lack of access to healthcare.

See also  Scotland: Woman (72) falls - postman is too tired to help the elderly

Looking toward a future that he said will be defined by two seismic shifts – the climate crisis and digital transformation – Guterres said the pandemic offers the world a chance to build back better by investing in education and digital literacy.

“COVID-19 is a human tragedy,” he said. “But it has also created a generational opportunity. An opportunity to build back a more equal and sustainable world.”

The number of coronavirus infections and deaths attributed to the respiratory disease it carries continued to rise in Florida on Saturday, when the state added 10,328 new cases – the sixth time in seven days Florida counted more than 10,000 new infections.

In the past week, the seven-day average for deaths statewide hit 95 – after setting a record with 132 deaths Tuesday and then surpassing it with 156 on Thursday. The seven-day rolling average is more than double what it was the week of July 6.

In South Florida, where 42% of the state’s infections have been recorded, Broward County imposed a curfew from 11 p.m. to 5 a.m., Friday. Curfews have also been imposed in Miami-Dade County.

Iran estimates up to 25M cases

Iran’s president Saturday estimated as many as 25 million Iranians could have been infected with the coronavirus since the outbreak’s beginning, and urged the public to take the pandemic seriously, the state-run IRNA news agency reported.

President Hassan Rouhani cited a new Iranian Health Ministry study in offering the unprecedentedly high number of infections. Officials have not explained what the report’s estimates are based on and the study has not been made public. Rouhani also said he believes an additional 30 million-35 million people could be infected in coming months, again without citing the basis for his estimate. Iran’s population is around 81 million people.

Iran has seen the worst outbreak in the Middle East, with more than 270,000 confirmed cases and at least 13,979 deaths.

As churches reopen, outbreaks are sprouting

Almost 40 places of worship and religious events have been linked to more than 650 U.S. cases of the coronavirus since the pandemic began, according to tracking by the New York Times. Along with the nationwide surge in infections that has followed the loosening of restrictions aimed at combating the virus, outbreaks connected to churches have sprouted at several spots.

Those include a Pentecostal church in northeastern Oregon tied to at least 236 positive tests; five flareups linked to churches in West Virginia, the largest one resulting in 51 infections; more than 50 cases stemming from an evangelical church outside San Antonio where the pastor allowed hugging again; a large worship service in Cleveland, Tennessee, that appears to have generated at least a dozen cases, including the pastor, who said he stopped counting after 12; a Christian camp in Missouri that had to shut down after 82 campers, counselors and staffers contracted the virus despite taking a number of precautions.

The governor laid out guidelines for when schools will be allowed to reopen during a press conference Friday. Schools must remain closed until their county has been off the state’s “watch list” for 14 days, he said.

Thirty-two counties are currently on the state’s monitoring list because of concerning coronavirus transmission and hospitalization rates. Counties on the list face restrictions on reopening various segments of the economy.

In the last 30 days, there is only one U.S. state that has not seen a single COVID-19 related death: Vermont.

Vermont’s neighbors — one of which, New York, was once considered the epicenter of the virus — have seen downward trends in reported cases and deaths. Still, New Hampshire reported 24 deaths in July, while Massachusetts and New York reported 326 and 357 deaths respectively so far this month.

Vermont has remained steady at 56 deaths from COVID-19 since June 18, a trend Health Commissioner Mark Levine attributes to the vigilance of Vermonters as well as strict health protocols for those in long term care facilities, who account for 52% of the state’s fatalities. 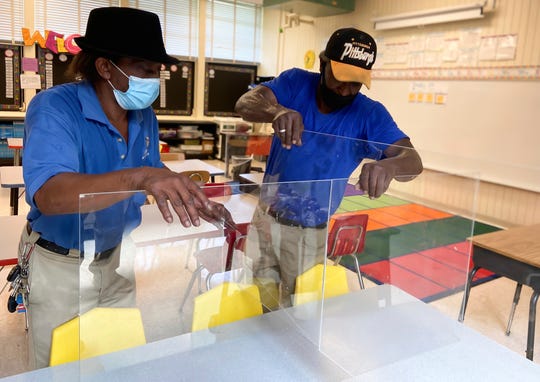 Amid growing angst among parents and educators, the Texas Education Agency softened its stance on in-person instruction mandates as schools navigate around the coronavirus pandemic. The agency issued new rules Friday that give local school districts more control over the decisions on start dates and on how long schools can remain closed and teach students online.

The TEA’s new rules come a week after the agency laid out guidelines that required parents to choose between sending their children to school in person all the time or only being educated online, rather than any combination of the two.

The agency is extending the time districts can teach online without financial penalty, allowing districts to teach online for up to eight weeks, with the second four weeks requiring a waiver from the state.

COVID survivors’ main symptoms can linger for weeks or even months, causing pain, trouble breathing, nightmares and even organ failure.

Florida’s former top coronavirus data scientist filed a whistleblower complaint Thursday against the state’s Health Department, accusing the agency of firing her in retaliation for refusing to manipulate data to support the push to reopen Florida after months of quarantine.

“These efforts to falsify the numbers are a pattern and practice in Florida government that goes on to this day,” Jones’ attorney, Rick Johnson, said in a statement. “Ron DeSantis has routinely given false numbers to the press. His underlings at (the Health Department) follow his example and his direction.”

Not everyone is staying home this summer. Some travelers are shrugging off the resurgence of COVID-19 infections, ignoring the shutdowns and taking a vacation anyway.

Half of Americans plan to stay put this summer, according to a new survey by LuggageHero. But 31% have taken a domestic trip since lockdown restrictions were eased, and a remarkable 19% have traveled internationally.

More on the coronavirus from USA TODAY

Where a face mask is required: Many governors are instituting or renewing orders requiring people to wear face coverings in public as cases continue to rise. Is your state on the list? See it here.

Coronavirus Watch: We have a few ways for you to stay informed. Sign up for our daily coronavirus newsletter here, and come together and share the latest information about the coronavirus, coping with lifestyle changes and more by joining our Facebook group.

Where are states on reopening? More than half of all states, including California and Michigan, have paused reopening plans or are taking steps to halt the spread of COVID-19. Here’s the list.

What went wrong in Florida? Two months after Gov. Ron DeSantis boasted about proving the experts wrong by flattening the curve and getting COVID-19 under control, Florida has become the state that other states don’t want to become.