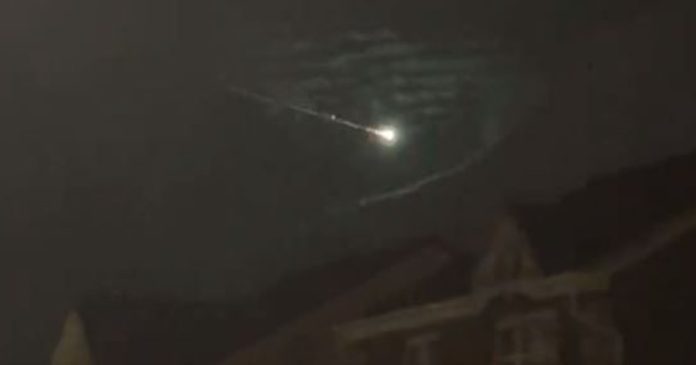 Meteorites, asteroids or crashing space junk? A mysterious event causes excitement. Crowds were seen in Scotland and northern England as a large ball of fire exploded at around 9 p.m. on Wednesday. In several videos intended to show a celestial shot, a brightly glowing object can be seen running through the night with a fiery tail. Witnesses described the incident as “incredible” and “breathtaking”. The UK Meteor Network has confirmed that it has received reports of over 200 fireball sightings. There is a lot of discussion going on now.

“Have I really seen a shooting star in Motherwell, or is that something falling from the sky?” Rhiannon Hayes writes. A Twitter user accidentally opened fire and posted the short video online. The film has been clicked more than two million times in a short span of time.

One of the best fireball videos I’ve seen tonight. We are investigating to find out what the object was. Meteor or space debris. https://t.co/Ko1lKRoPut

“There was no sound and it didn’t explode”

In the comments below the video, many people share more videos that show the mysterious sky plane. At one point it says: “Just saw that. At first I thought it was a firecracker. But there was no sound and no explosion, so I quickly pulled out my phone. Is there a meteor shower coming or something? “

A surveillance camera in Linlithgow, West Lothian also captured fireballs shooting through the sky in the distance. Users who viewed the celestial scene said they had never seen it before. “Yeah, seen in central Glasgow about 30 minutes ago – much bigger than what I’ve seen before,” writes one man. Another wrote: “Just saw this in Glasgow around 10pm! I’ve never seen anything like this!” Elsewhere, “My two daughters and I saw the meteor, it was amazing, but one of my younger daughters was scared.”

that UK Meteor Network There is a group in the UK with a network of 170 detection cameras recording meteors and fireballs. The network confirmed the spectacular event, so the videos are actually real. The UK Meteor Network said it would “investigate the phenomenon whether the object was – a meteor or space debris”.