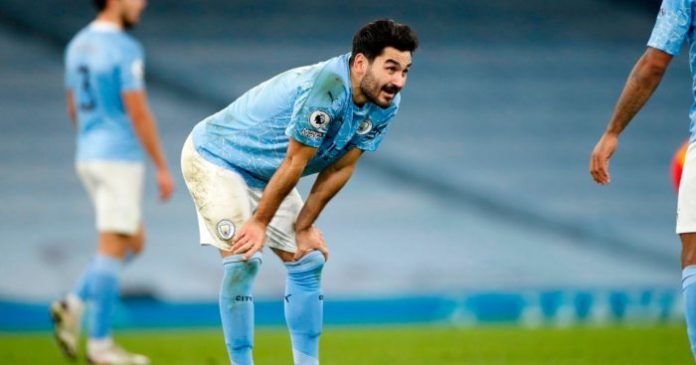 Pep Guardiola’s side looked sluggish again, and his lack of cuts proved costly as he had 26 shots but managed to get only seven on goal.

The result leaves City with 20 points from 12 games, scoring just 18 league goals in the campaign, far from their usual free-flowing best.

Guardiola’s side have been trying to capture the entire season since the campaign started late due to their Champions League commitments in August, and Gundog suggested the lack of a break was part of the problem.

The German international said: “It is almost impossible to build just one team that is at the top and dominates anything, especially with the arrival of the schedule.”

“All the teams in Europe are constantly struggling to win games. But we have responsibilities and we should win these kinds of games, especially at home.

“We are human beings, not machines, we also struggle. It won’t be much easier in the next few weeks. ”

That was the first goal City conceded in 608 minutes in all competitions, and it proved costly when Johnston was late.

“We would have won that game, but now we can’t change that,” Gundog added. “We could have done better but that didn’t mean it.

“We can complain but we can’t change it and we have to accept it. We have to look ahead. We were more deserving, we had opportunities. I don’t know what to say, it’s frustrating to get an issue. We must win these kinds of games. “

City came into the game behind criticism of their frequent pedestrian performances in Saturday’s goalless Manchester derby, and made a slightly quicker start on home turf against a team with a poor defensive record in the league.

But Guardiola put it far below the way he established himself against West Brom.

“The players are there,” he said. “We scored a goal.

“We struggled for this game with long balls and other balls.

“They attacked our left side and we couldn’t control it with Benjamin (Mandy) and Phil (Foden).

“Sometimes you need patience and we try to find it but it’s not easy. The second half was better but we couldn’t score.

Ahead of Saturday’s trip to Southampton, one of City’s top teams in the league, Guardiola admitted that his focus on the game had only increased.

“This was an important week and it didn’t start well in terms of getting three points,” he said.

“We have to keep going. It’s no secret. This is a strange situation for many reasons. We will go to Southampton and try to play well. ”