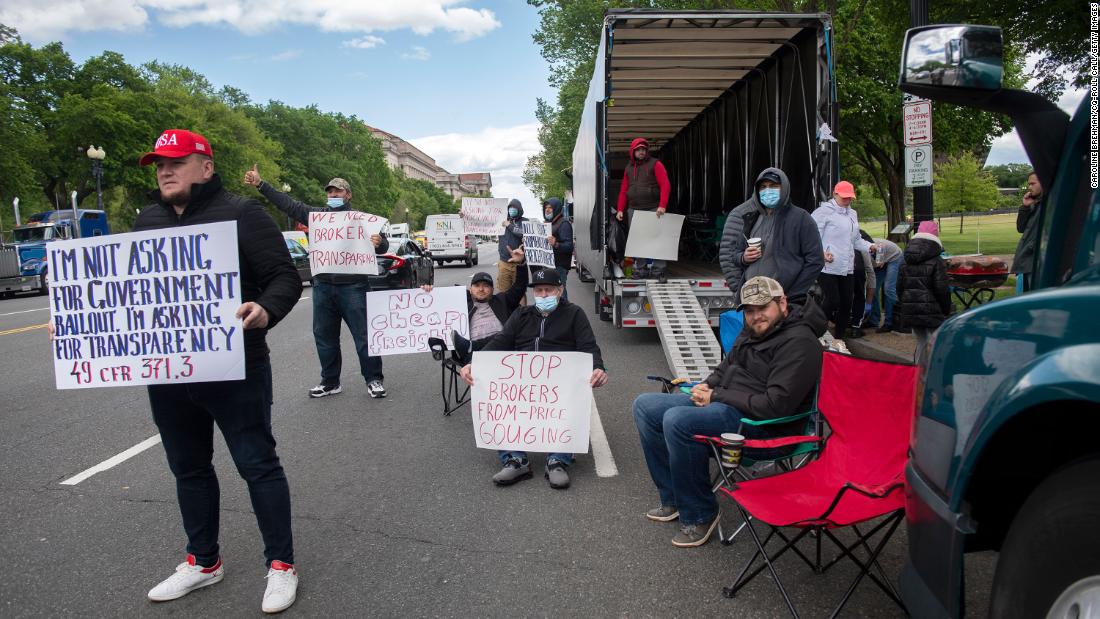 “And you hear it out, that wonderful sound – those are truck drivers who are with us all the way. They are protesting in favor of President Trump, quite the opposite,” said Trump. “There are hundreds of trucks out there, and that’s the sign of love. Not the sign of your typical protest. So I want to thank our great truckers. They like me and I like them.”

In another Rose Garden speech later in the day, Trump said, “They are friendly truck drivers. They are on our side. It’s almost a celebration, in a way.”

Trump had made a similar statement about the protesters in an interview with him registered Wednesday with Maria Bartiromo of Fox Business. When Trump asked Bartiromo if he knew what the sound was in the background, he said correctly: “Demonstrators for truck drivers, right?” Trump replied, “Well, they are not demonstrators. They are supporters of me.”

First the facts: All three of Trump’s claims were false. The truck drivers who have lined the streets near the White House since May 1 are indeed protesters, not people holding any kind of celebration – and are protesting against a variety of issues affecting their work, not protesting for Trump. Indeed, one of their complaints concerns what they say is lax federal enforcement of a regulation that requires more transparency from commodity brokers.

Truckers’ complaints are numerous and varied. They include what they say are unfairly low freight rates during the coronavirus pandemic, brokers’ price cuts, poorly conceived safety rules and permissive federal attitudes towards autonomous vehicles that threaten their occupation.

Greg Anderson, who claimed to have been in the trucking sector for 33 years, told CNN on Friday that Trump had “lied to national television” with his remark to Bartiromo about how protesters weren’t demonstrators at all.

Recent protests by truck drivers in other cities have raised problems similar to those discussed in Washington.

There were pro-Trump messages visible on some of the trucks that lined Constitution Avenue on Friday morning. But the participating truck drivers, many of whom are independent operators, stressed that they were not present for the purpose of praising the President.

“There are people who actually love Trump, there are people who really don’t,” Michael Landis, CEO of the United States Transportation Alliance non-profit advocacy and a truck driver owner who is part of the protest, told CNN Friday afternoon. “It’s about trying to get his attention so we can talk directly to him about the many problems we’re having here in the truck industry, because we’ve tried other routes and haven’t been successful.”

Truck driver and protester Brian Brase echoed those comments in an interview with CNN ahead of Trump’s comments on Friday.

“This is not a protest in support of Donald Trump or a rally for Trump. Not that we are against him in any way. Most of these guys here have probably voted for him, honestly. But we have been disappointed by the administration, by part of (Transportation) Secretary Elaine Chao of the Federal Motor Carrier Safety Administration (FMCSA), “he said.

Trump expressed support for truck drivers in a May 3 Tweetand had handed out red hats to protest the participants. He approved one of the main complaints of the protest in an interview with Fox News on May 8, say truck drivers are “cut down on price”. (Brokers to deny the insulting accusation, saying that prices are so low because there are too many truck drivers chasing too little transportation during the pandemic.)
White House chief of staff Mark Meadows came out on Wednesday to meet the protesters, The Trucker’s industry website reported – asking Landis about their concerns and saying to them: “The President has listened to you and wants us to do something”. Meadows also promised to speak to Attorney General William Barr about the broker’s transparency concerns, The Trucker reported.
Administration announced Thursday was changing a federal rule to offer drivers more flexibility than rest and hours of service. Landis described it as a step forward but insufficient.
See also  Scottish Premier League - 102 points: Glasgow Rangers finish the season without a loss