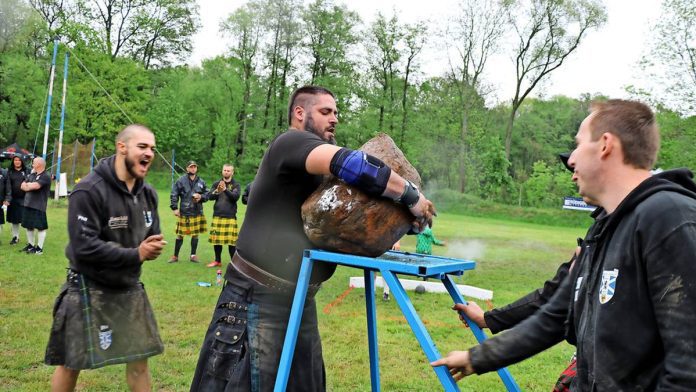 happy palaceWhen strongmen in kilts master a course with tree trunks, roll barrels, lifting 115 kilograms of stones, and straw sacks, it’s the Highland Games again in the Froeburg district of Preznitz. And they cannot do without whiskey, nor without Scottish music and Irish tap dance. And certainly not without the fluffy Highland cattle.

The weather on Saturday surprised neither the visitors nor the participants. “Liquid Sunshine” – Liquid Sunshine – called it a spectator who bravely endured in the rain to observe the team competitions on the playing field. And the organizers, McGregor 1999 Pritznitz Club, couldn’t have wished for better weather for the 20th edition – it’s raining in Scotland.

There was only one drawback: the stones were quite slippery to push and lift, making chalk necessary. However, not for everyone. “Real men don’t need them,” said Mad Dogs’ Dennis, who started with a six-man strength.

A total of nine men’s teams at the Highland Games in Preznitz.

A total of nine men’s teams from across Germany grabbed stones, barrels and tree trunks on Saturday, after all it was a matter of determining the German champions of the amateur teams. And not only for men, but also for women. And then the Nettle Highlander Club offered him the strongest girls.

Conquerors were also sought in another area – from German breeding to Scottish Highland cattle (Highland cattle). And in the round before the judges, a two-year-old heifer (a sexually mature female heifer that has not yet given birth to a calf) was able to convince Pepper vom Diebeschamp and Allenfier’s young bull Seamus.