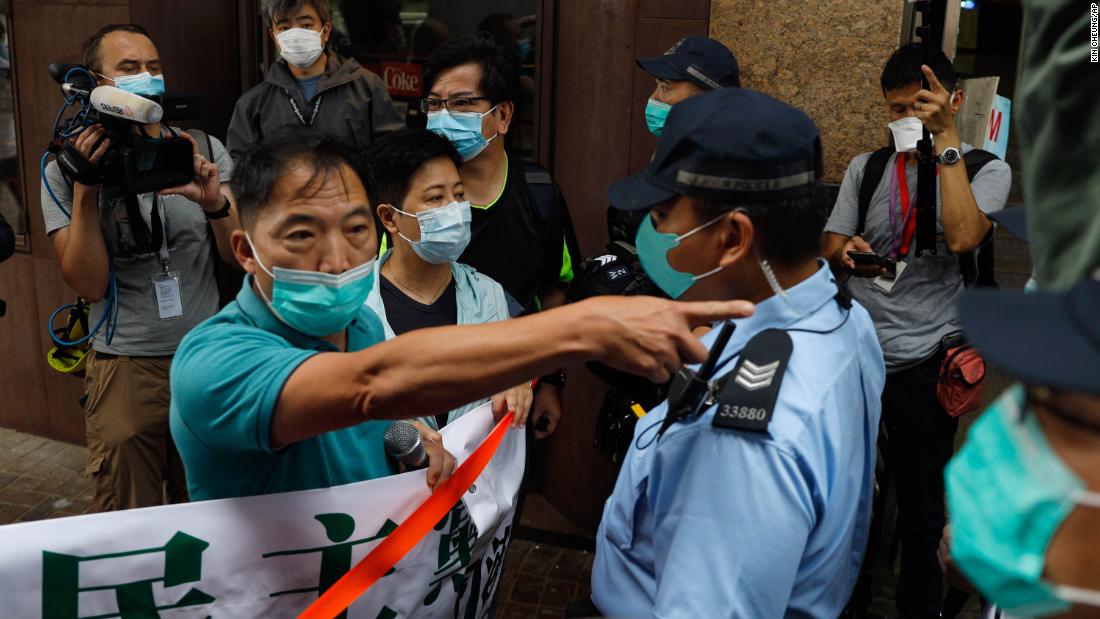 Police fired tear gas at the crowds less than an hour after the start of the march, which did not receive official authorization and went against coronavirus social distancing restrictions, which ban groups of more than eight people meeting. An online stream showed protesters throwing objects at police.

Protesters had begun gathering around midday in Causeway Bay, a busy shopping district, despite a heavy police presence across Hong Kong Island. Attempts to claim the march was a permitted “health talk” were unsuccessful, and police quickly declared the protest illegal and ordered people to disperse.

Several thousand people marched nevertheless, chanting slogans which became a familiar refrain in the city during the over six-months of anti-government unrest, including “Liberate Hong Kong, revolution of our times.”

Others chanted “Hong Kong independence, the only way out,” and others flew blue, pro-independence flags. Such activity could likely be illegal under the proposed security law. Beijing has often expressed outrage over separatist sentiment in the city, which remains a niche issue but gained influence during last year’s unrest.

Asked if she was worried about the potential repercussions of chanting such slogans, Macy Wong, 26, said that she was comfortable doing so, as others were doing the same.

“Independence is Hong Kong’s long-term goal,” Wong said. “Maybe it’s not feasible in the near future, but that’s ultimately what we want.”

China announced Thursday that it plans to introduce a new national security law in Hong Kong — bypassing the city’s legislature — which is expected to ban sedition, secession and subversion against Beijing. It will also enable mainland Chinese national security agencies to operate in the city for the first time.

Beijing’s move implies much greater intervention in the city, which has largely been allowed to manage its own affairs since the former British colony became a semi-autonomous region of China more than 20 years ago.

“It is the end of ‘one country, two systems’,” said Dennis Kwok, a pro-democracy lawmaker, referring to the principle by which Hong Kong has retained limited democracy and civil liberties since coming under Chinese control. “(They are) completely destroying Hong Kong.”

The move is likely to fuel further anger and protests in the city, which was rocked by over six months of increasingly violent anti-government unrest last year.

Those protests began over proposed law that would allow for extradition to mainland China, but expanded to include calls for an independent inquiry into police brutality and greater democracy.

The legislation, expected to be passed by china’s National People’s Congress (NPC) later this month, is set to be introduced in Hong Kong through a rarely used constitutional method that will bypass Hong Kong’s legislature.

The law will have drastic effects on large swathes of Hong Kong society, from the city’s political sphere to media, education and international business.

Chinese officials and state media defended the law as vital to protecting national security in the wake of last year’s protests and a 17-year failure by the Hong Kong government to pass similar legislation, since the last effort was met with mass protests in 2003.

“National security is the bedrock underpinning a country’s stability. Safeguarding national security serves the fundamental interests of all Chinese people, including our HK compatriots,” NPC spokesman Zhang Yesui told a news conference in Beijing on Thursday.

Hong Kong has always prided itself on following the rule of law, with an independent judiciary and civil liberties far beyond what is allowed across the border in mainland China.

These rights are enshrined within the Basic Law — the city’s de facto constitution — and guaranteed (in theory) by an agreement between China and the United Kingdom when Hong Kong was handed over to Chinese rule in 1997. Hong Kong, unlike China, is also party to international treaties guaranteeing various civil liberties.

The new law challenges all of this. By criminalizing such a broad swath of ill-defined acts, it could give the authorities leeway to go after the city’s opposition as they see fit.

In China, sweeping national security laws have been used to target human rights activists, lawyers, journalists and pro-democracy campaigners. Nobel Peace Prize laureate Liu Xiaobo, who died in 2017 after more than a decade behind bars, was convicted of “inciting subversion of state power.”

US Secretary of State Mike Pompeo condemned the proposed national security law, warning that the passage of the legislation would be a “death knell” for Hong Kong’s autonomy.

“The United States strongly urges Beijing to reconsider its disastrous proposal, abide by its international obligations, and respect Hong Kong’s high degree of autonomy, democratic institutions, and civil liberties, which are key to preserving its special status under US law,” he said, adding that the US stands “with the people of Hong Kong.”

Extraordinary. A dream job on an island in Scotland… without hot water or electricity