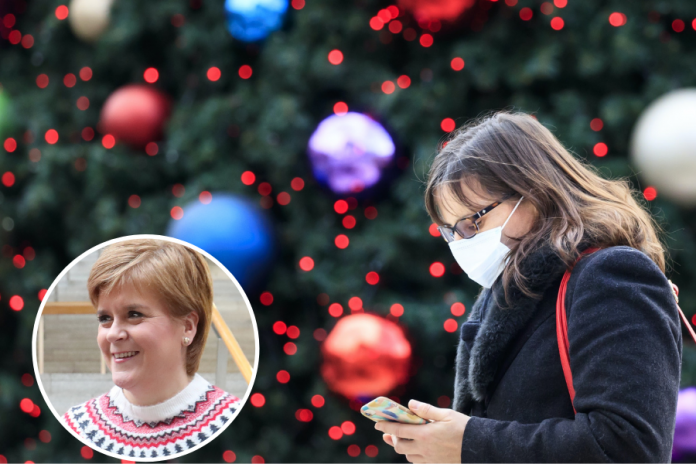 UK governments have been urged to show some courage and wreckage plans to ease coronavirus sanctions over Christmas.

Linda Bould, a professor of public health at the University of Edinburgh, said letting homes mix during the holidays would lead to ‘misery’ in January and February.

Last month, the governments of London, Edinburgh, Cardiff and Belfast agreed on a joint approach, allowing three homes to form a bubble and merging between 23 and 27 December.

But, with the increasing number of cases and the discovery of new strains of Covid, that decision has come under pressure.

Instead, perhaps the UK government will tighten its advice in England, warning people to think twice about seeing elderly loved ones.

The meeting between Cabinet Secretary Michael Gove and the leaders of the perverted countries did not end on an agreement last evening.

More discussions are to be held this morning.

Yesterday, on Holyroad, Nicola Sturgeon hinted that, if necessary, Scotland could pull out of the agreement and reintroduce some restrictions on Christmas. He realized he was keen to reduce the number of homes that could reach three to two during Christmas.

read more: Nicola Sturgeon may be forced to change the end of the Christmas Covid rules

Speaking on the BBC’s Today program, Professor Bould said it was a “win-win” situation for governments.

“I think if they had changed their direction now, they would have lost faith in the government because the British people had a commitment that they could travel and get more than five days of rest. On the other hand, if they do not change the guidelines, or if they are not more clear about the dangers, we are in a really difficult situation.

“We really got more people yesterday. We almost reached the peak we had in mid-April. It is very close with over 20,000 people at the moment and we have over 18,000.

“So, the situation is very worrying.”

She agreed that it would be very difficult to tell people who have booked tickets or traveled for dispatch. Instead, he said governments should change the plan but promise not to penalize those who break the rules.

“But if they were brave they would really say, look, if you can avoid it, just change your plans, if you can,” he said.

“We are talking about preventable death here. It’s not a trivial thing, and I know people also have consequences of being separated, we’ve all talked about it, but you know we’re going to make January and February even more miserable, I think that’s the thing. Leaders need to be courageous. ”

On Tuesday, the waiver was called a “big mistake” by BMJ and the Health Services Journal yesterday.

In response to a question from Green MSP Patrick Harvey at Holyroad yesterday, the first minister defended the initial decision.

He said: “People have different opinions about what we should do over Christmas, and I don’t think the decision was silly. I know from my point of view, I can’t speak for others, it wasn’t spots, it was carefully considered, it was painful. These decisions are always distressing, because they are not straightforward and either are not white and simple answers, absolutely true and false. ”

She said any discussion about the rules was in four countries, “citing family examples in the UK.”

See also  'We are all literally George': the mayor of St. Paul reflects on the generations of pain among African Americans

Sturgeon added: “I think there is a case for us as to whether we should tighten the relief that was given to both in terms of the duration and number they received,” MSP said.

Sturz said she hoped it would be possible to “come to an agreement of four countries”, but if that did not happen, “we will of course consider within the Scottish government what we deem appropriate.”

Mark Drackford, Welsh’s first minister, said he would not give up “lightly”.

He told the Welsh Parliament: “The choice is terrible, isn’t it? I have read in my own email account over the last few days that heartfelt requests from people not to go against what we have agreed to for Christmas.

“People who live completely alone, who have arranged to be with people for the first time, tell me that this is the only thing they have been able to look forward to in recent weeks. Yet we know that if people do not use the normal amount of extra freedom responsibly, we will see the impact on our already severely pressured health care.

According to Yugov, 57% of people in the UK say the rules should be relaxed while maintaining the current rules. Only 31% say relaxation of rules should be pursued at Christmas time.