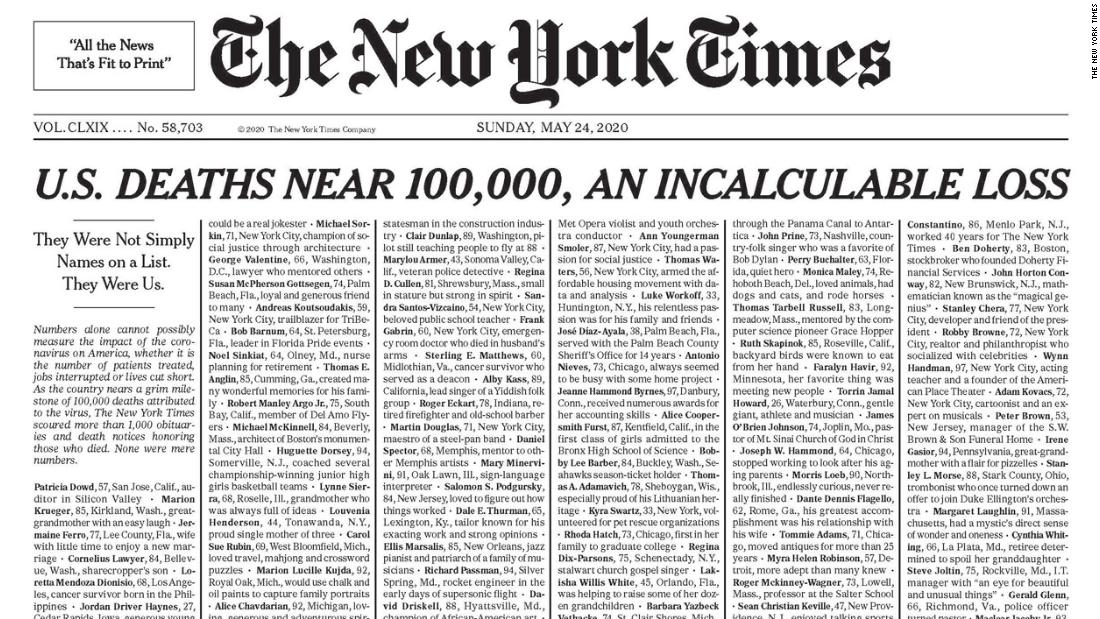 The total losses from the Covid-19 pandemic are, indeed, incalculable. The losses are greater than any illustration or description. But The Times is trying, in a unique way, by dedicating Sunday’s front page and three inside pages to the names of about one thousand victims.

The result: A front page devoid of any photographs, news articles, ads, or anything else. The entire page is filled with the dead, under a banner headline that says “U.S. DEATHS NEAR 100,000, AN INCALCULABLE LOSS.”

Many experts say the Covid-19 death toll is even worse, because some victims died at home or weren’t counted for other reasons. But as the number of confirmed deaths approaches 100,000, editors and reporters at The Times talked about ways to take stock of what has happened in the past few months.

“We knew that there should be some way to try to reckon with that number,” Simone Landon, an assistant editor of the Times’ Graphics desk, said in a behind the scenes feature.

Landon said the project is also a response to “a little bit of a fatigue.”

As the national emergency has stretched from days to weeks to months, a certain level of numbness has set in. The numbers are hard to fathom.

So The Times gathered names and stories of Covid-19 victims from newspapers across America. “The 1,000 people here reflect just 1% of the toll,” the paper’s description of the list says. “None were mere numbers.”

The columns and columns of names are about life as well as death:

Angeline Michalopulos, 92, “was never afraid to sing or dance.”

Lila Fenwick, 87, was “the first black woman to graduate from Harvard Law.”

April Dunn, 33, was an “advocate for disability rights.”

Frank Gabrin, 60, was an “emergency room doctor who died in his husband’s arms.”

Skylar Herbert, 5, was “Michigan’s youngest victim of the coronavirus pandemic.”

William D. Greeke, 55, “thought it was important to know a person’s life story.”

Dan Barry, a veteran writer for The Times, has an essay inside the paper about “The Human Toll” of the pandemic to date.

“Imagine,” he writes, “a city of 100,000 residents that was here for New Year’s Day but has now been wiped from the American map.”