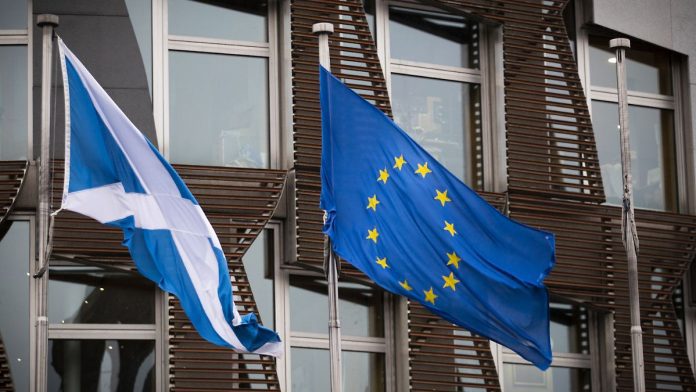 “Not a particularly long process”
In the event of independence, Scotland hopes to return to the European Union

The Scottish prime minister is optimistic about the country’s possible independence. Should Scots decide to secede from Great Britain in the event of a new referendum, Sturgeon hopes for a quick re-entry into the European Union.

Scottish Prime Minister Nicola Sturgeon is hoping for early re-entry into the European Union in the event of independence from Great Britain. Although there will be talks, most experts agree that “it will not be a particularly lengthy process,” Sturgeon said in Edinburgh. “No one who can be trusted seriously thinks that Scotland is not welcome back in the EU.”

In a referendum in 2014, more than half of Scotland’s voters opposed separation from the United Kingdom. However, Scotland left the European Union as part of the United Kingdom in 2020. Supporters of an independent Scotland argue that this has radically changed the situation and that Scots should vote for their country’s independence again.

In his commentary on the economy of an independent Scotland, Sturgeon explained that border controls would be necessary for the movement of goods between Scotland and its closest trading partner, England. The fear of passport control, for example, when visiting relatives across borders, is “nonsense”, as Scotland will remain in a common territory with Ireland and Great Britain, which have freedom of travel. Sturgeon also confirmed plans to introduce a new currency – a Scottish pound. However, she didn’t want to set a timeline for it yet.

The leader of the Scottish National Party (SNP) has set a referendum target for October 19, 2023. At the request of the Scottish Government, the Supreme Court of the UK is currently investigating whether Edinburgh can legitimately hold such a vote, even if the UK central government does not allow it to proceed.