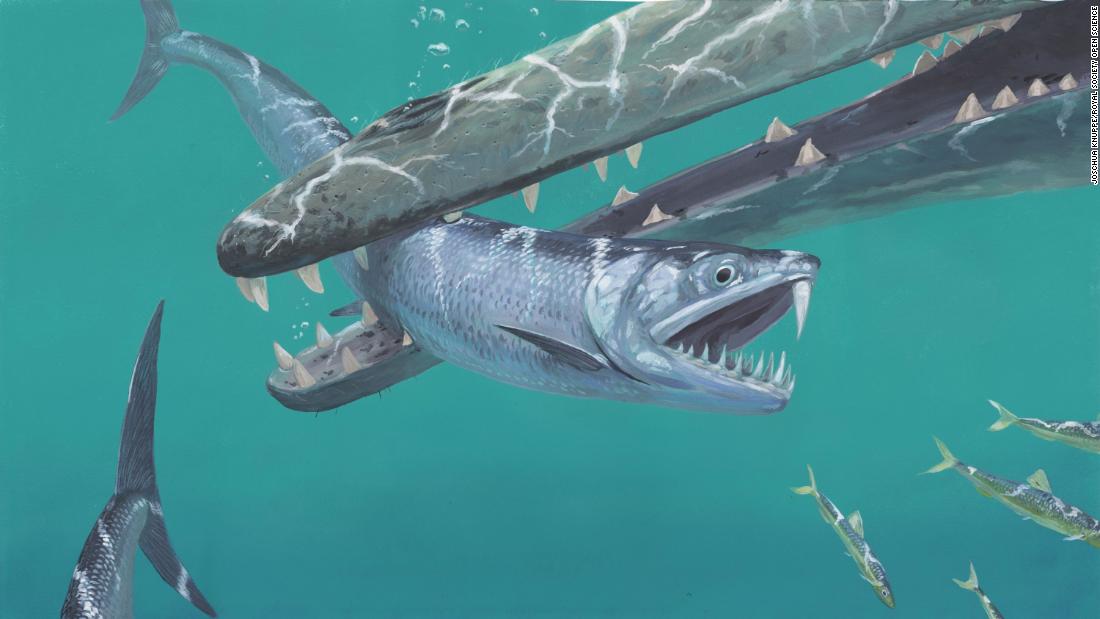 But the fossil record shows that the anchovies of the past were more formidable.

An international team of researchers recently reported two species of fish that roamed the seas 40 to 45 million years ago. The two species had fangs that covered the lower jaws and a single saber tooth on the upper jaws, suggesting that they were predators that hunted smaller fish.

“This discovery adds an important piece to the larger picture of fish evolution and how marine environments have turned into what we see today,” wrote Alessio Capobianco, a researcher at the University of Michigan and lead author of the study, in an e-mail to CNN.

The results were published in the journal this month Royal Society Open Science.

Saber-tooth anchovies were a progeny of today’s species

The team studied two species of these saber-tooth anchovies using fossils. One, called Clupeopsis straeleni, was discovered in Belgium and was first described in the 1940s. It was just under half a meter long. The other, called Monosmilus chureloides, it was discovered in Pakistan and was about a meter long.

CT scans conducted on fossils revealed the unique arrangement of the teeth and also showed that the two species shared many anatomical features with modern anchovies.

“This was another big surprise for us, as all living anchovies are much smaller than the extinct ones and most of them specialize in eating plankton and have very small teeth,” Capobianco wrote.

The two species are not direct ancestors of anchovies, but rather a “derivation from the lineage that leads to anchovies that have not survived to the present day,” said Capobianco. In fact, modern-looking anchovies were probably already present while their saber-toothed cousins ​​swam in the seas.

“However, since most living anchovies are plankton feeders with small or absent teeth, the discovery of saber-tooth anchovies raises the question: anchovy ancestors also fed on creatures that eat fish and only later developed adaptations for plankton feeding? ” Capobianco wrote. “Or were they similar in habit to living species and did the saber-toothed shapes evolve from plankton eaters?”

About 66 million years ago, a global mass extinction wiped out not only dinosaurs, but also predatory fish and reptiles. The loss of those species in the seas has left a vacant place in marine ecosystems, explained Capobianco, which different species have tried to fill by diversifying and evolving into new forms.

Some of those species of predatory fish have evolved into animals we see today, such as mackerel, tuna and barracuda, he said. Others, such as saber-tooth anchovies, eventually died out.

“Saber-tooth anchovies are a perfect example of such failed evolutionary experiments: short-lived groups that have not survived to the present day with significant adaptations that cannot be predicted based on living species,” Capobianco wrote.

One possible explanation could have been competition with other predatory fish that have survived to this day. Another explanation suggests that their extinction could be the result of global climate change that has occurred since swimming in the seas.

But at the moment there is not enough data to know.