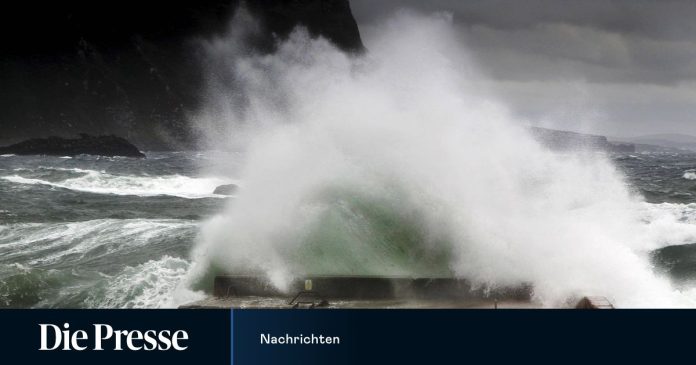 Winds gusted up to 140 kilometers per hour off the east coast of Scotland on Saturday. A woman died.

Hurricane Malik killed one in Scotland A woman was killed after a tree fell in Aberdeen, police in the British part of the country said on Saturday. Wind speeds of about 140 kilometers per hour were measured over the Scottish east coast. To be on the safe side, two first-class football games were cancelled.

The storm also caused damage in northern England. Across the country, more than 60,000 homes had no electricity as lines were cut.

Denmark is arming itself

Meanwhile, the forerunners of “Malik” met with Denmark. 10,000 rescuers were ready there, as reported by the Ritzau Agency. In Frederiksund, 20 people dependent on daily care have been moved to safer places as a precaution, broadcaster TV2 reports. If there was a flood, the supply of these people could not be guaranteed, the reason was given. According to the broadcaster DR, on the island of Zeeland, on which the capital Copenhagen is also located, almost all regional train traffic was stopped as a precaution.

A stormy night was approaching northern Germany as well. The German Meteorological Service (DWD) has issued a storm warning for the coast and in the north-eastern part of the country. In Scotland, the weather service warned of more strong winds and heavy rain despite “Malik”‘s departure. A new storm was brewing north of the British Isles, which officials were naming “Carrie”.