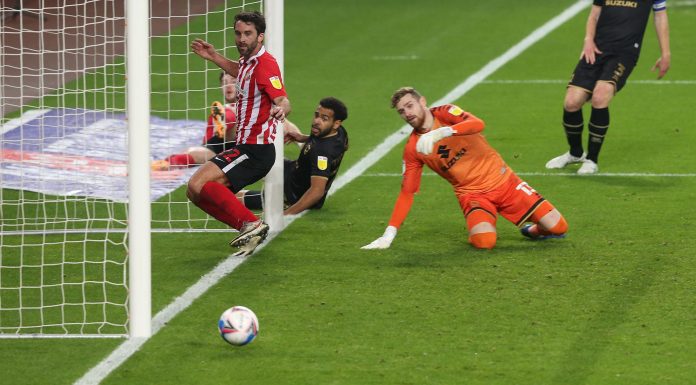 PIL acknowledges Sunderland’s failure to convert their chances into a 2-1 defeat against Parkinson MK Dons this afternoon “unacceptable” – and will claim that Will Grigg accepted responsibility for a missed formation of the season.

Black Cats M.K. The Dons lost to a team that had gone through a 20-run win in the lead games before traveling to the Victory Stadium of Light, giving Max Power’s deflected opener several chances to add.

Grigg failed to score from some yard after Linden Gooch delivered the ball from the right side, shining in the 18-yard B across X without converting.

Parkinson said: “In terms of the opportunities in and around the six-yard box, what we don’t accept is unacceptable. I think it’s fair to say.

“You don’t get gilt-edge moments like we have and we keep going over time, and expect to be on top if you don’t take it.

“There are four or five moments today where we needed that combination to get a goal closer to six-yarders, and I would say it’s not acceptable, we haven’t turned it into a target.

“I would say that our expected goals based on the opportunities created say we should be scoring more, but we are not taking that. I’ve never seen so many gilt-wire opportunities – this has been the case in this game as well as in others. ”

Gig’s miss was particularly poor, with Gooch leading the ball out of the yard from one yard in front of the goal line after crossing from the right.

The Northern Irishman seemed more concerned with avoiding a collision with Dons goalkeeper Rewandrew Fisher than raising the ball home, and Parkinson admitted that it was impossible to deny the importance of Miss.

He said: “He (Greg) worked on his socks. He needed a game last week. Physically, I thought he was better today, but he knows (he missed a bad one). He’s the first person to hold his hand in the dressing room because he knows those opportunities have to be counted. ”

Sunderland’s tactics were difficult for most of the game, with Gooch believing to be an alternate between playing like a right wing and managing the field as a winger.

Parkinson says the approach was a pre-planned attempt to prevent MK Dons from playing from behind.

He said: “We knew that MK Dons wanted to play later, and they often start with Richard Keogh. We wanted to push Josh Scowan over his deep-seated playmaker and Linden Gooch over Dean Lavington.

“He then pushes Jordan (Willis) to the wing-back to push him to the side when he has the ball, and to be fair, it was good. We knew we had to suppress them high and most of the time, we did that.

“The first 15, 20 minutes, our quality on the ball was not very good. We have a lot of ladies who have done a lot of training recently. As the half went on, we got better in terms of our football. ”