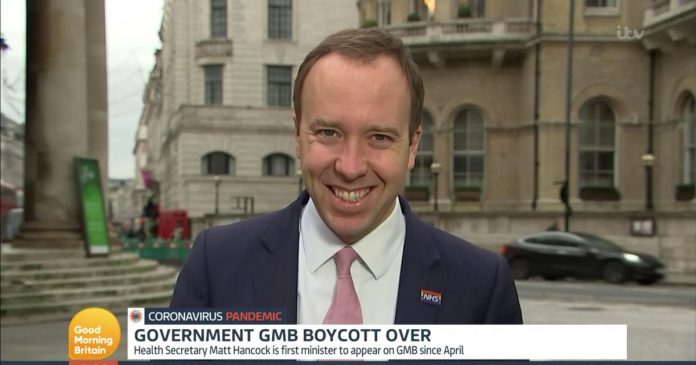 Pierce Morgan today demanded to know why Matt Hancock did not resign, as the Tories finally ended the TV presenter’s 201-day boycott.

After the ministers ran the show for six months, the health secretary was the first to experience ITV’s Good Morning Britain’s full 21-minute rage.

GMB was knocked out of the Prime Minister’s interview round this morning after No. 10 Communications dropped out with Lee Cain.

But Mr Cain left last week in a dramatic bust up with Prime Minister’s aide Dominic Cummings – and now the GMB interview has resumed.

Instead of focusing on the news of the day, Pierce Morgan went over all the questions he couldn’t ask about Covid’s first wave.

The boom presenter said that there is very little PPE. Is, which has resulted in the deaths of hundreds of heart workers.

He said care homes receive thousands of elderly patients from hospitals with covid, UK borders were not closed, first masks were not advised, and ministers were also initially shaking hands.

He also said that Matt Hancock had a large gathering in March and that the first lockdown was “at least two weeks too late”.

And he said the government stopped testing the community by pursuing an unofficial strategy of “mob immunity,” which it denies.

G.M.B. The host said: “I told you that we now have more than 20,000,000 people dead in this country, the worst death toll in all of Europe. Why are you still the health secretary and why have you not offered to resign?” ”

Mr Hancock retorted: “Well, because we are responding to all these enormous challenges of this unprecedented epidemic.”

“During testing, I hit every target I set – now half a million tests of day capacity. And I’m here to let you know that we’ll double that in the next few months.

“That means we can use testing to find out where the virus is and decisively we’ve changed that time and people can be isolated if needed.”

But the health secretary acknowledged that there were “mistakes” in the government’s response.

He added: “Throughout the year we have been experiencing a series of failures and U-turns. Are you ready to admit any errors in the chargesheet you read? ”

Mr Hancock replied: “Sure, we certainly made mistakes.

“I’ll give you one – when we first guided the funeral to the summit, it was interpreted to be so tight that even your spouse could not go to the funeral of a person who died of coronavirus.

“Now, that was wrong and we changed it. So completely we will learn about science. “

GMB host Susanna Reed challenged Mr Hancock on why patients leaving the hospital for care homes are not tested in the first wave.

He acknowledged: “The advice was that there should be no asymptomatic transmission.

“And now that we know this can happen, we’ve brought in rules for care homes.”

But one of the many questions he would not answer directly was on Dominic Cummings.

In the spring, the health secretary defended the prime minister’s aide for breaking lockdown rules from a 500-mile round trip to Durham.

Asked today if he supports it again, Mr Hancock said: “I’m not going to get into it. What I’m worried about is the future.”

As the 201-day boycott came to an end, Mr Hancock insisted he would speak to ITV soon last week and return “diaries allow that soon”.

He said: “I am here to answer all the questions you may have on behalf of your audience.

“I was told to come last week and I said I could come soon and I’m here.”