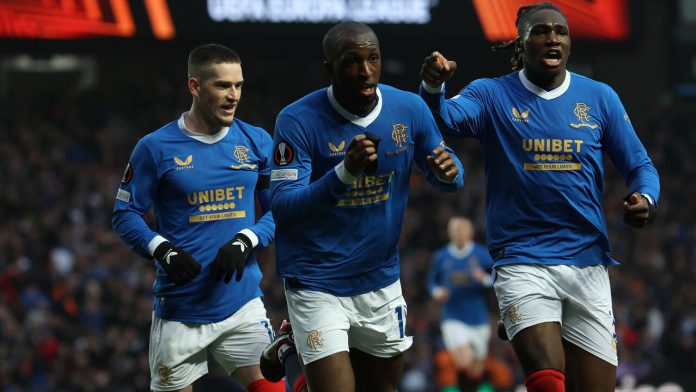 It has been 50 years since the Glasgow club last won an international title.

In 1972, Glasgow Rangers won the European Cup Winners’ Cup in a thrilling 3–2 final against Dinamo Moscow, of all places, at the Camp Nou in Spain. Now, half a century later, Rangers are looking to repeat that victory in Seville.

“Highly Evolved Over the Years”

Haring himself arrived in Scotland in 2018 and was able to follow Rangers’ developments live. “When I came here, Celtic were clearly the best team. Over the last few years, Rangers have developed tremendously as a team and even won the league last season.”

After bankruptcy in 2012, the traditional club had to claw their way back to the Fourth Division, in 2016 they finally managed to be promoted again to the Scottish Premiership, and the Championship title in 2021 is the biggest success of this new era so far.

But what makes a team? Haring only sees a few weak points.

“In terms of individual players, they are probably the strongest team in Scotland. They are also very compact and allow almost nothing. In particular they show individual quality that can decide every game. You Can’t focus on one player, because there are too many good players on the team,” said the Hearts legionnaire about the Rangers’ strengths.

Fans are ‘positively crazy about football’

Fans are also an important feature of Glasgow. At the local Ibrox stadium, fanatical fans cause a veritable cauldron at every Europa League home game, and according to the “BBC” 100,000 supporters have even declared themselves for the final in Seville.

However, the official quota is only 9,500 tickets, so most Scots have to watch the game outside the Estadio Ramon Sánchez Pizjuan.

Speaking about the Scottish fans, Haring said: “The support in Scotland is amazing, people are really passionate about the game and that definitely defines Scottish football. You could say that everyone is positive.” Football crazy.”

Do Rangers have what it takes to hold their own against Frankfurt? A Scottish victory would come as no surprise to Haring.

“I definitely think they can win the game. They have already knocked out two teams from the German Bundesliga, Dortmund and Leipzig. They are already a bigger club than Frankfurt, so it is definitely possible. They can win this final as well.” said the Austrian, considering past opponents.

In addition to the German clubs, Scots OFB kicker Aleksandar Dragović and his team were able to knock out Rotor Stern Belgrade 4–2 in the round of 16. In the quarter-finals, Rangers defeated SC Braga 3–2 after extra time. Thriller.

“will be a huge hit for the whole of Scotland”

It’s been 39 years since the Scottish team won an international title. In 1983, under the then 41-year-old Sir Alex Ferguson, Aberdeen FC sensationally won the European Cup Winners’ Cup 2–1 after extra time against Real Madrid.

Haring summarized the excitement: “It will be very special for Scottish football. It will really be a huge success for the whole of Scotland and everyone will be celebrating, so there is no need to talk about it.”

But how will Haring follow the game? The Legionnaire smiles and says: “It’s not like I’m sitting on the sofa at home and crossing my fingers for them, they’ll be our opponents in the cup on Saturday. But we’re looking forward to the game because maybe they’ll put their best foot forward in it.” Will put in the energy, then hopefully we will be fresh on Saturday.”

The ‘biggest game in Scottish football’ begins at 9pm on Wednesday (including video highlights of the hottest scenes to follow in the LAOLA1 live ticker>>>).