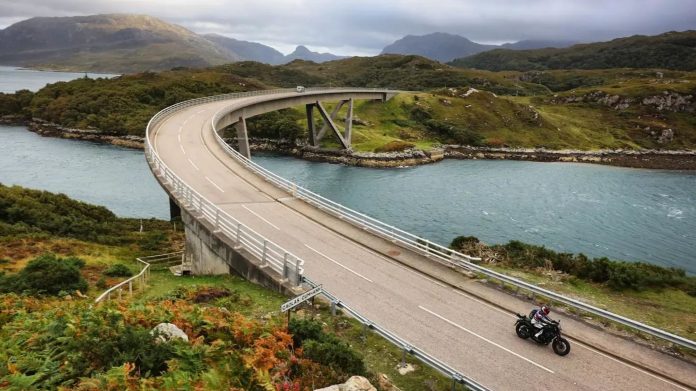 Five hundred miles Which is translated from our parts, they travel 800 km. A distance along which, the itinerary, manages to catapult anyone, in all shoes (sorry, wheels), into a dreamlike dimension. away from it all. Where nature explodes everywhere grand and invincible, leaving man only two possibilities: to conform to His will and to contemplate in His magnificence.

Tours and Races: Curves and Well Being, from Tuscia to Tuscany

From Inverness, a Journey through the Wonders of Scotland

An awareness, this, that immediately pervades you along the North Coast 500; Simultaneously with a precarious sense of freedom, mixed with the joy of an endless path, now narrow and long, now tortuous and unpredictable, pierces the stunning coastal landscape of the Scottish Highlands. but that’s not all. especially on the west side – where the road runs sharply between fjords and sheer cliffs, Interconnecting electrifying visuals of curves with steep ups and downs – you can experience the real road racing sensations.

A perfect place to understand the particular concept of British motorcycling sportsmanship: long straights lost in thin air, narrow and perfectly paved roads, to tackle in the fairing, until the approaching of a bunch of curves that makes you sway your torso. Don’t lift it up, pull it hard, lower your knee and blow up! A sensation that is as unique as it is exciting.

way . starts in the city Inverness, on the shores of Loch Ness (yes, the one in Nessie’s legend), and along the east coast, passing the majestic Dunrobin Castle, stretches to the extreme northeast of the legendary John O’ Groats, Scotland, overlooking Orkney for the islands. Getting here by motorbike gives authentic “finis terra” sensations; But it is only the appetizer of the miracles that follow, touch Dunnet Head, Tongue, and Then the Beautiful West Coast (perhaps the most beautiful), which reaches the towns of Ullapool, Garloch, Torridon and Applecross, between beaches, fjords, lakes, mountain ranges, waterfalls and endless moors, where it turns to the sea to close the circle by turning the wheels. drop offs. Inverness.

Along the way, there are a number of small villages and distinctive cottages, scattered between the coast and the hinterland, which remain isolated under a blanket of frost in winter; And then to “fruiting” in spring, when snow gives way to bursts of color. There is no shortage of wonders immersed in so many wonders, such as the “Castle of the Hermit”, in Achmelwich Bay, one of the smallest in Europe; Or the Old Man of Stor, a 60-metre-high pile of local sandstone that rises in the Hebridian archipelago between the northwestern highlands and the islands of Lewis and Harris.

Then in the evening, with motorbikes to relax in, after a day’s folds and miles, nothing better than to experience a whiskey – the highly prized local produce – to warm up the bones and indulge in sleep, as a new day. Ready for the world with one of the most beautiful roads.

Tours and Races: The Terrace of Maratia