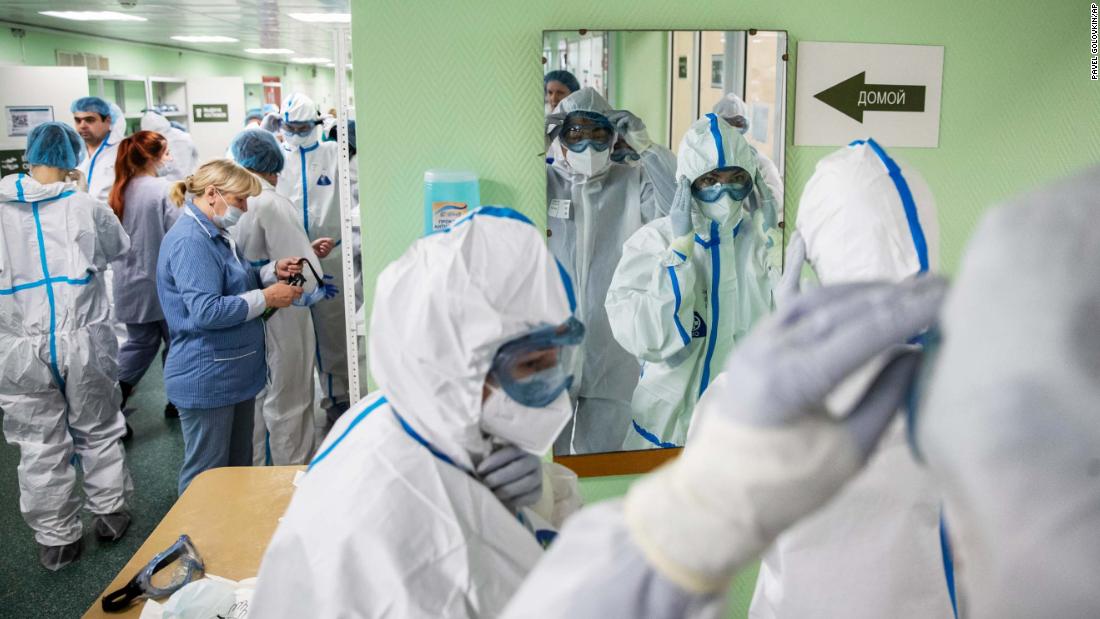 The Russian capital was the hardest hit. Of Russia’s 281,752 confirmed cases, over half – 142,824 – are in Moscow, coronavirus headquarters said on Sunday. But the virus is now spreading to the regions of Russia, a huge land mass covering 11 time zones and includes some of the country’s most remote and impoverished places.

In a videoconference meeting on Monday with Russia’s 85 regional leaders, Russian President Vladimir Putin said that the burden would fall on local leaders to decide whether to continue blocking measures or to begin to cautiously lift restrictions to reopen the economy. .

“We have a large country,” he said. “The epidemiological situation varies from one region to another. We have taken this into consideration previously, and now in the next phase, we must act in an even more specific and careful way”.

According to official statistics, the pandemic has reached all constituent parts of Russia, from the Kaliningrad enclave between Poland and Lithuania to the remote autonomous okrug of Chukotka, across the Bering Strait from Alaska. Regions of Russia are also starting to report their numbers, sometimes showing a disparity between nationally published statistics on mortality and infections published on the stopcoronavirus.rf portal and local government websites.

Kaliningrad region, for example, reported 13 dead as of Friday, while the nation’s coronavirus headquarters reported 11. The contrast between national and local mortality data was even more evident in the Chelyabinsk region of the Urals: Local authorities there reported 10 deaths related to Covid-19 in addition to six deaths attributed directly to coronavirus on the national portal.

Russian Deputy Prime Minister Tatiana Golikova told Russian news this week that the Russian government has not manipulated statistics, but Russia’s mortality figures have become political football. Observers noted the relatively low overall death toll in Russia – a total that currently stands at 2,631, according to the country’s coronavirus headquarters – although the country occupies second place in the world in the number of confirmed cases , behind the United States.

In Moscow, health officials responded to media reports that he was underestimating the deaths from Covid-19, claiming that his data was “absolutely open”. But the city’s health department also acknowledged that only deaths that were found through post mortem autopsy were directly caused by coronavirus complications.

And the capital proceeds with caution. Earlier this week, Putin announced a gradual easing of restrictions across the country, at the discretion of the local leadership. But Moscow Mayor Sergey Sobyanin later made it clear that he was in no hurry to end the blockade.

“The premature removal of restrictions carries a real risk of a second pandemic,” he said in a statement on Thursday. “Unjustified delays will affect people even in the strongest way.”

Sobyanin was, in many respects, the public face of Russia’s struggle with the coronavirus, while Putin took refuge in his Novo-Ogaryovo residence.

As the cases started to accelerate in April, Moscow authorities opened a new coronavirus hospital, built in about a month. And the Sobyanin government oversaw the introduction of electronic passes to enforce blocking measures, controversial measures ahead of the rest of the country. The city is also launching an extensive coronavirus screening program which will be free to the public.

Moscow, in many ways, is better equipped to deal with the crisis than Russia’s poorer regions. It has a concentration of wealth and budgetary resources which is the envy of the rest of the country.

Under Sobyanin, the Russian capital, which in the pre-coronavirus era was turning into an Instagram-friendly landscape of refurbished parks, trendy restaurants and high-end properties, it enjoyed insane municipal spending.

Last year the main commercial newspaper Vedomosti reported that the city’s budget for beautification projects over the past decade – over 1.5 trillion rubles ($ 20.5 billion), according to the Moscow budget data – was almost equivalent to the total amount spent on similar projects around the country.

It is not necessary to travel far outside of Moscow to see the disparities in living standards and the decrepitude of the health system.

A viral Youtube video recently published by the famous Russian journalist Irina Shikhman showed a visit to the city of Ivanteyevka, a city just over 10 miles outside the Moscow city limits of a local clinic as it receives a delivery of personal protective equipment. As Shikhman begins the formal interview, a masked doctor claims that he has no “complaints” about supplies and that he has enough staff to manage patients.

But the images in the video, which had more than 3,327,000 views, shows the peeling paint and the dimly lit interior of the facility and underscores the shocking conditions of the Russian provincial health care system. It seems that in this sprawling country, time is not the only thing that differs between the capital and the regions.

This story has been updated.