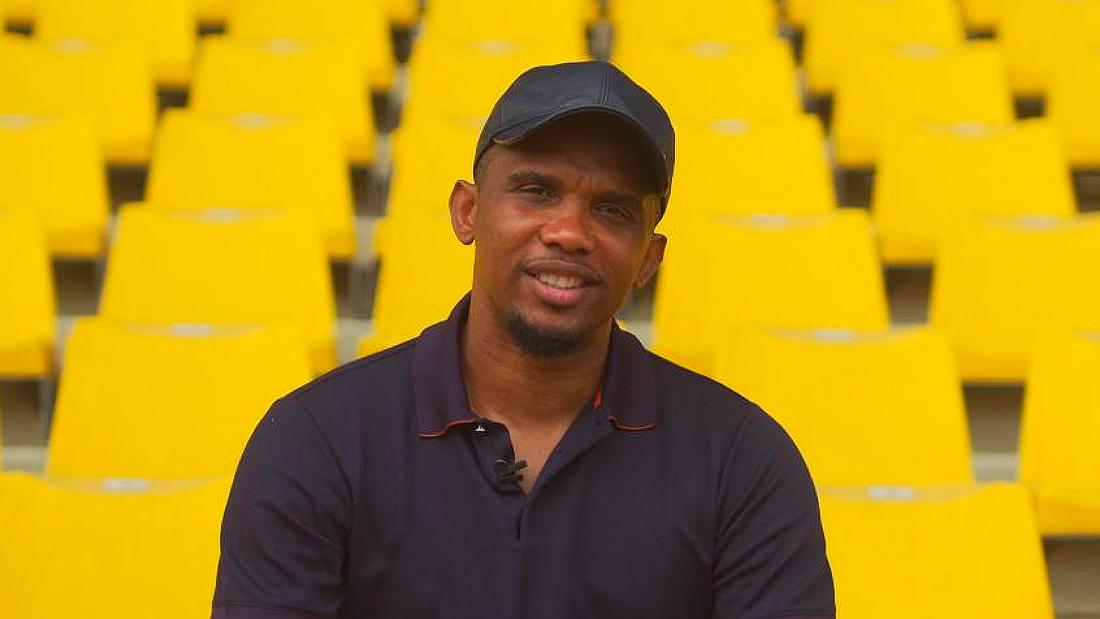 CNN was with football legend Samuel Eto’o when he visited his hometown for the last time in February, before the coronavirus pandemic forced countries around the world to close. Many New Bell residents filled the streets as word spread that the international superstar had returned home. A woman, dressed only with a bath towel, quickly jumped out of the shower to greet him, without wanting to miss the opportunity.

“People go out massively because I have a feeling of happiness, hope,” said Eto’o, through a translator. “I hope Almighty God will still allow me to share that feeling with them.”

The chants of Eto’o’s name began to resonate in the streets and although large crowds began to form, they all respectfully gave him his space. At some point, they even formed a human chain to allow Eto’o to cross the blocks and visit some of his loved ones.

“I grew up in the hands of the people you saw,” he said. “Some are my paternal uncles, and others are the neighborhood elders who took care of me in my teens; they would advise me because they felt I had something and that I could go out.”

He therefore underlined a point of reference for which his city is unfortunately known. “If we go a little further, we will see that the central prison is nearby. It seemed more likely that I would have ended up in that prison.”

A legacy beyond football

Samuel Eto’o avoided prison. Instead, at the age of 16, he went to Europe to begin what would become a long and successful international football career, which has lasted for more than two decades. He has won the African Player of the Year award four times and helped Cameroon win his first gold medal in the 2000 Olympics.

The man who once collaborated with other greats like Lionel Messi and Ronaldinho in Barcelona has become famous for his game on the field, but here in Cameroon he is considered for something more than his sporting prowess.

The next morning, on a misty football field in Douala, Eto’o was on the sidelines watching a group of young players at work. He couldn’t help pulling one to the side. “I explained how it should position itself when it sounds,” said Eto’o. “How can he have the advantage over his opponent with the right body position.”

Here at Kadji Sports Academy, the same academy as Eto’o, players are fortunate enough to receive advice from their home hero. But Eto’o doesn’t just offer tutoring. Through the foundation which started in 2006, Eto’o has also funded the development and training of many promising young Cameroon footballers.

“We have tried to create dreams,” explained Eto’o, naming a number of former Academy players who now play for European teams.

Tchokote Gassi Christian hopes to join that list. He is one of the aspiring professional footballers who receive funding from the foundation. “I wasn’t born into a wealthy family, so it was often difficult to come back from training and find a meal ready to help me recover … I don’t have this problem anymore.” Christian said. “In some countries, they are not lucky enough to have someone like Pope Samuel who helps young people follow their dreams.”

‘The best goal we have scored’

Later that day, Eto’o made another stop. In a small room he was seated next to a new mother and was holding her small child in her arms. The premature baby was being treated in a place that is one of Eto’o’s proudest results. With a smile on his face, Eto’o said: “I think the best goal we have marked with the foundation was the Samuel Eto’o Pavilion at the Lacquintinie hospital”.

See also  Malaysian factories hit for the first time in four months | Money
It is a 48-bed children’s ward in the largest public hospital in Douala which was built and fully equipped since its foundation in 2017.
Children and babies can receive much needed emergency and specialist care. As in much of sub-Saharan Africa, Cameroonian children under five die at almost twice the rate of the world average, according to World Bank data.

“I think that’s the purpose of my life,” said Eto’o. “To contribute to the development of our society by helping the state and the Cameroonians to have a building where people can come and say ‘here we can go home in good health'”.

In addition to the hospital and training academy, the Eto foundation has funded and created projects to support education, health and community development, including orphanages, scholarships and road construction.

“Our story should be written by us and through us,” said Eto’o. “Don’t wait for others to come and do what we ourselves can do instead.”

A few months later, in April, news surfaced that French doctors had proposed testing a potential Covid-19 treatment in Africa. Samuel Eto’o, who has been openly speaking about racism in football, was among many well-known Africans who condemned this thought, calling the comments “colonialism” and expressing his frustration with social media.

Although he is confined to his home in Paris during the pandemic, he has deployed his foundations to provide “Stop Covid-19” kits that contain masks, soap, rice, water and other items to help people in Cameroon stay at home and stay sterilized.

According to the director of the foundation Patrick Mbiele Happi, the kits were delivered to 50,000 families in the four worst affected cities, including Douala, Eto’o’s hometown. The foundation also distributed 22,000 washable masks to motorcyclists and taxi drivers, according to Happi.

While the world was in a different place when Eto’o had returned to Cameroon, he was still talking about facing adversity in his country. “I like challenges and especially success,” said the football legend. “So for me the motivation is: I’m done here, what should I do tomorrow? What should I do? There is a new challenge, so there are all.”

Andrea Smith and Briana Duggan contributed to this story.