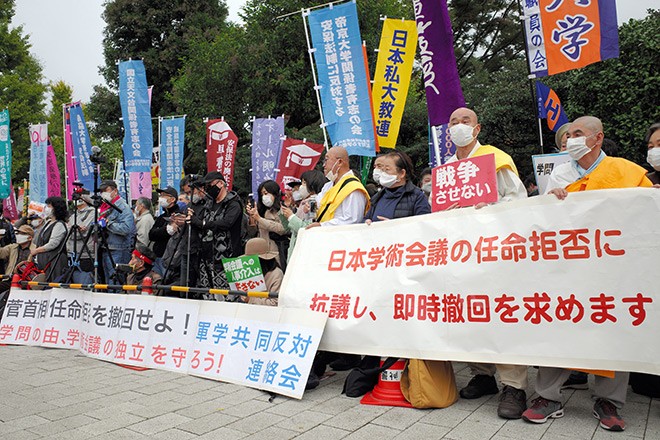 An estimated 40 scholars and citizens gathered in front of the Diet Building on Nov. 1 to protest Prime Minister Yoshihide Suga’s refusal to appoint six scholars to Japan’s Science Council.

In Tokyo’s Nagatacho district, security laws were opposed by the Association of Folkcholas, an academic group and other groups criticizing the national security law enacted in 2015 during Shinzo Abe’s administration.

Academics and others suspect that Suga rejected six scholars because of their past objections to government policies, including security laws.

Manabu Sato, a specially appointed professor at Gakushuvin University, a representative founding member of the union, said Prime Minister Yoshihide Suga’s aggression should not be tolerated in a democratic nation. “It’s an arbitrary reinterpretation of the constitution.”

Tammy Cano, a professor at Okinomizu University and a former member of the Science Council, said the six scholars recommended by the council should be given immediate positions.

“Refusal of membership harms the honor of scholars,” he said. “If people are deprived of their dignity without any explanation, they will be more traumatized.”

The protest was attended by a female student of K First Ledge.

The 19-year-old said trying to control people intimidates not only scholars but also students. “Such acts would deprive students of the right to purpose and rigorous study.”