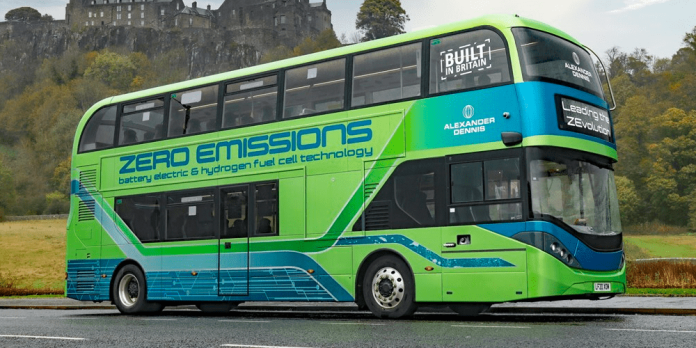 The Scottish Government has awarded over £62m in the first phase of its Zero Emission Bus Challenge Fund (ScotZEB) to replace 276 old diesel buses with new electric buses and the necessary charging infrastructure. Of these, 137 electric buses will be built by ADL in Falkirk.

The sum of £62 million is equal to €74.2 million. According to the statement, it is “the largest investment ever to decarbonize buses in Scotland” and supports the government’s “Mission Zero” ambitions for the transport sector.

“We want more people to choose to travel by bus now and in the future, knowing that local buses contribute to our climate change ambitions,” said Transport Minister Jenny Gilruth. “Our Zero Emissions Bus Challenge Fund is decarbonizing Scotland’s bus fleet faster than ever.”

In addition, some public transport operators have spoken out in the government’s announcement, stating that they were only able to afford the purchase of e-buses for “ScotEZB” funding. “As a small local operator, it was difficult for us to compete with the larger operators and secure financial support for the switch,” says William Houston, owner of Coach of Houston in Lockerbies. “The ‘ScottZeb’ program has helped us stay competitive and enabled Houston to invest in new zero-emissions buses.”

Producer Alexander Denis Ltd also surprisingly welcomes the promotion. ADL manufactures its electric buses with drives from BYD in Falkirk, Scotland, which is located between Glasgow and Edinburgh. With 137 vehicles, half of the subsidized e-buses come from ADL.

Paul Davies, President and CEO of ADL, says, “These zero-emissions buses will be built at our Falkirk plant, ensuring that this Scottish Government investment is made domestically to benefit our team members and our communities. to be felt.” , “We look forward to working with successful operators to finalize the terms and get their teams working on these buses.”
Transport.gov.scot, alexander-dennis.com

See also  Mark Cuban was seriously weighing up a race for the president last month. That's why he decided not to