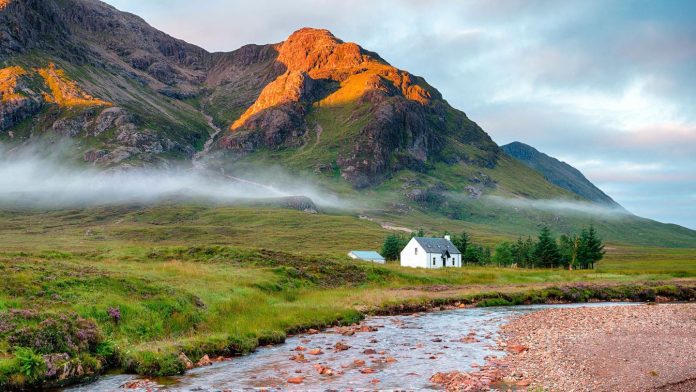 Geoff Allen learned of and fell in love with Scottish shelters as a student in Edinburgh. Since then he has visited everyone he knows, sometimes several times, and with “The Bothie Bible” and “Scottish Bothie Walks” he wrote two such successful books about the Bothie that they were found throughout Scotland. were able to travel for a long time. In the interview he talks about his attractions, his favorite places and gives useful tips

For those hearing about both for the first time. What exactly do the Scots mean by this and what makes them so unique?

The name Bothy derives from the Gaelic word “bothan” or the Welsh “bwthin”, meaning “little hut”. Contrary to what most people may know from the Alps, these huts were not built specifically to accommodate hikers along famous paths or down peaks, but they were already there. In most cases they were built in the late 19th century when many people left the highlands to work and settle elsewhere. An entire village often consisted of a single individual or family, for example a shepherd, who then lived in seclusion. Therefore they are widely distributed throughout Scotland. It is these huts that are used as both these days. The idea to use these abandoned cottages as game shelters came about in the early 1930s when many people in Scotland were unemployed and moving across the country. He took shelter in the huts. The NGO has been managed and revamped since 1965 Mountain Boathis Association (MBA) About 100 huts in the country. They are unlocked and available to all for free.

When did you first hear about the Bothies and what attracted you so much about them?

I am from Suffolk near London. But my family was always out a lot. I have been hiking since I was seven years old. I moved to Scotland to study and joined the University Walking Club. It was here that I first heard about the Bothie concept and couldn’t believe there was an entire network of these cottages in Scotland. At that time there was neither a book nor a website where coordinates of individual huts could be found. Everything went by word of mouth. My first tour then took me to the beautiful city of Clumban. The feeling of being able to settle down to visit the countryside for yourself, living for free in the most beautiful places in Scotland was and is still very appealing. Since the first visit, I’ve been obsessed with both. I always had a list of shacks that I still wanted to visit.

Both: The Most Beautiful Addresses in Scotland 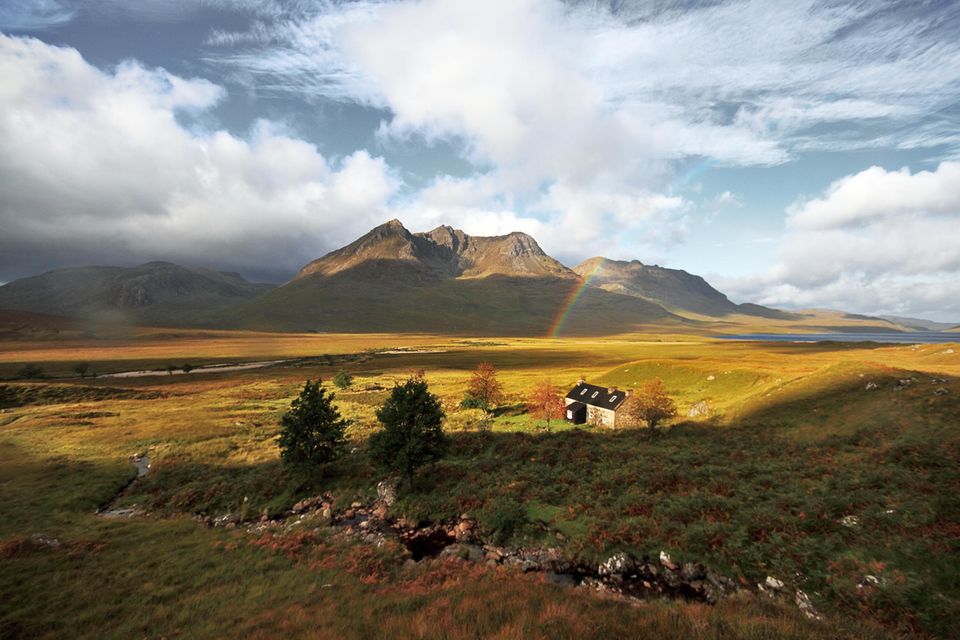 Set in dramatic scenery between the twin peaks of En Tealach and Bein Dearg Mor, the hike to Bothie Shenavel isn’t a must for beginners

Certainly a lot has changed with the advent of digital media. Or are the coordinates of the shackles still only available verbally?

no, with this moment that Mountain Boethies Association Having received the status of a non-profit organization, he was obliged to disclose certain things. So did the huts he took care of. In a jiffy, about 100 both companions and their coordinates were searchable online. It was certainly very controversial in the outside community. But till date there are about 80 or 90 game shelters that are nowhere to be found and you only come to know about their existence when you meet someone who has already been there. I find it remarkable that this is still possible in our digital age. But I think it’s part of the Bothie experience. If you’ve found something that hardly anyone knows, you want to keep this secret to yourself. At least the Scots stay that way.

so that was a good grade that i had with my first book “The Bothie Bible” have gone. For example, I deliberately avoided naming the exact coordinates of The Secret Half, which certainly would have been annoying.

Let’s talk about your books. You’ve actually explored many of both, except in the example mentioned. It not only gave good sales figures but also drew criticism. Because of your book, the “wrong people” would be out and about, for example, that was said. How did you deal with it

Yes, till today there are people who are not good with me, who believe that I have destroyed the magic of both for everyone’s sake. Most of the shacks I’ve visited can also be found on the MBA website. Personal attacks were sometimes very harmful, especially online. I’ve stopped reading comments or reviews and instead focused more on personal, positive feedback.

Moreover, my opinion is: who is really the custodian of this knowledge? I was able to visit and know all these beautiful places, why shouldn’t other people be allowed to do the same? As long as they both follow netiquette, I don’t see the problem. Of course there are huts that are seen more now than ever before. But here too: who are the “wrong people”? Both are open to all and anyone who comes to meet them must accept it and come with the people they meet. Even if at first glance they may not be someone with whom you would exchange ideas in everyday life, it is an opportunity to think outside the box and for me that is part of the bothie experience.

Geoff Allen says he never had a lot of money but always had a lot of freedom. Since his student life in the late 1980s, he has visited both of those he knows and has written two books about him since then.

You have already mentioned it. You can’t book a Bothie, so you can’t know in advance whether it’s already filled or not. What do I do if I come over and both are already busy?

The principle is: there is always room for one more. There are some couplets where it is wise to bring a tent. But especially when the weather is bad, we always try to make everyone sit in the hut.

And what can I expect there? How can I visualize a Bothie from inside?

Most huts do not have electricity or running water, but often have a stove and/or chimney. There are sleeping alcoves or platforms. Sometimes there are tables, chairs or even a chair. Water is brought from a nearby river and a shovel is used to go to the toilet. The range is very wide – some are almost furnished like hostels, others are cold and empty. So it’s up to you to make these places a home. You have to fill them with life.

So what shouldn’t be in a backpack for both of you on a hike?

It is best to take with you everything that you would take with you for a night in a tent. Also candles, some firewood or charcoal, extra clothing to keep you warm and dry after the hike, and a reward or something to enjoy on the spot. For example, I always bring fresh vegetables to cook on site or a bottle of wine or whiskey to share with others around the fire.

Now I need your expert advice. After going through almost all the boats, which are your favorites and why?

I will name three and tell you right away what they are best suited for. Let’s start with “The Lookout” on the Isle of Skye. This ancient lookout is perched high on the Ruba Hunnish cliff and offers spectacular views of the sea and the Outer Hebrides. If you come at the right time of year, with a little luck and binoculars, you can even spot whales. Since the climb here is only under two miles, the lookout is great for families. You are more likely to spend the day here than staying overnight. A good option to get to know both.

Possibly the most famous of both are Shenavel. I have been there at least seven times because it is simply indescribably beautiful. The nearest road is about a day’s walk away. So you are in the middle of the forest in the forest of the southern slopes of a cockroach. Shenavale is on the relatively popular Cape Wrath Trail and is quite busy. That’s why it is advisable that you take a tent with you. I would recommend further enhancement to those who are already a little more experienced.

The third bothie I would like to recommend is Stayonig. I think this is the place I have visited the most in my life. This is also because the starting point of the hike can only be reached by train, not by car – I don’t have one. Bothi is very beautiful and is nestled in a wide mountainous landscape. Staioneag has a charm of its own and attracts a wide variety of people. Also because here it can be reached even without a car. I have already met a family here, which otherwise could not afford the vacation expenses and then used to spend the summer holidays there. It’s not just hikers and outsiders who get together here. I think it would be the perfect introduction to staying both nights. Just try the experience of both.