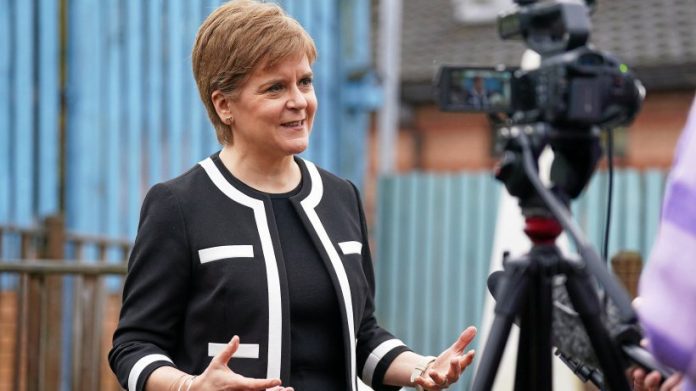 London.
The Supreme Court will pronounce its verdict on Wednesday. But even calling for a new referendum is unlikely to stop the independence movement.

The chaos and upheaval at Westminster affected the independence movement Scotland Strong. The government in Edinburgh wants to hold a second referendum in a year – but first a crucial court ruling is due on Wednesday.

At first, Scotland’s First Minister Nicola Sturgeon had kind words for the new prime minister. “I wish him well, regardless of our political differences,” she later wrote. Rishi Sunak end of october new prime minister was confirmed.

But then things got straight to the point: Sunak must call new elections immediately. “And for Scotland, he is another prime minister we haven’t voted for, and we certainly wouldn’t have voted for if we had the vote.” His proposed solution is hardly surprising: Independence,

Next phase of the campaign on Wednesday Scottish independence: London Supreme Court, Supreme Court Great BritainWill decide whether Edinburgh can hold an independence referendum on its own next year.

Sturgeon, who is also the chairman Scottish National Party (SNP) has followed events in the British capital over the past few months with the same dismay as many other Brits. “There are no words that can adequately describe this mess,” she said as prime minister. Liz Truss announced his resignation in October after six chaotic weeks.

But on the other hand, the First Minister may also sense an opportunity: the more bizarre the political hack in london, the more Scots ask themselves whether they want to remain a part of this kingdom. The government crisis at Westminster is the best advertisement for the Scottish independence movement.

Even the judges’ nos won’t stop the trend

New polls confirm this: The YouGov research institute published a poll in mid-October in which the “yes” side — for independence — had gained four percentage points. The yes and no camps are currently roughly balanced. However, the immediate problem for the SNP is that, as it currently stands, they cannot organize a referendum.

Under the Scotland Act 1998, which transferred some decision-making powers from London to Edinburgh, constitutional matters are reserved for the government in London. However, legal experts have not yet stated clearly whether this also applies to a independence referendum come into force. In the first vote in September 2014, which ended with a victory for the “No” campaign, the question was unnecessary: ​​London gave the green light from the outset.

In July, the Scottish government decided to clear things up once and for all. It has announced a referendum for October 2023 and has also asked the Supreme Court in London to examine whether the Scottish government itself can organize the referendum. The verdict will come on Wednesday morning. Even if it turns out to be negative, it will hardly reduce the yearning for freedom.

The crash of Britain’s economy fueled the independence movement

New momentum can already be felt in the freedom movement. The fear of instability and uncertainty that could lead to secession from England has always been a main argument for opponents – but now the reverse seems to be the case. While in London the government almost plunged the economy into the abyss and had to be rescued by the central bank, in Edinburgh politics exerted a very stabilizing influence.

The chaos in Westminster is the latest in a series of factors fueling the pro-independence movement in recent years. The most important is Brexit. In 2016, Scots voted 62 percent to remain in the EU. So they were thrown out of the EU against their will. There was no immediate push for the “yes” side afterwards. it was probably because after the Scots brexit earthquake There was little desire for further upheaval.

But, as pollster John Curtis of the University of Strathclyde in Glasgow recently wrote, this gradually changed in subsequent years: more and more Scottish EU advocates began toying with secession from England. This trend intensified after a hard Brexit: 67 percent of Remain supporters would now choose independence.

background: What you need to know about Rishi Sunak

Then there is the pandemic: while Boris Johnson tried to play down Covid and approach the crisis half-heartedly and somewhat irresponsibly, Nicola Sturgeon acted with the required seriousness and competence. Surveys confirm that the Edinburgh government’s handling of the crisis has given the SNP a significant boost.

Scotland would initially like to keep the pound as its currency

But the SNP has always been under pressure to come up with a more detailed blueprint for an independent country, particularly on the economy. To address concerns, the Scottish Government published a working paper in mid-October that aims to provide answers.

so scotland will do it first pounds maintained, but then introduced its own currency. The SNP also confirms it will bring an independent Scotland back into the EU – which, however, raises questions about how a hard border with England would be handled.

This article was first published on morgenpost.de.