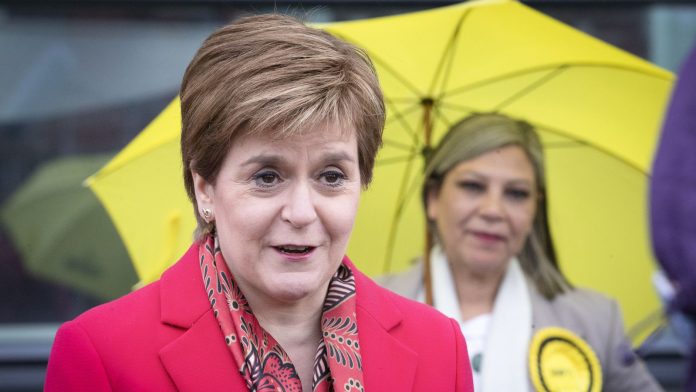 Prime Minister Nicola Sturgeon’s Scottish National Party (SNP) will have 64 of the 129 seats in parliament, according to the Edinburgh Electoral Commission on Saturday evening. The absolute majority is 65 seats.

However, since the Greens, who also advocate separation from the United Kingdom, receive eight mandates, the pro-independence party has a clear majority.

Buoyed by a strong result in the Scottish general election, the ruling SNP party has increased pressure on London to hold off a new independence referendum. The leader of the Scottish National Party (SNP), Prime Minister Nicola Sturgeon, said on Saturday evening, “Scots are the only people to decide about the future of Scotland.” In the controversy over a new referendum, she played the ball to British Prime Minister Boris Johnson’s field. If he tries to block a vote he faces a “fight with the democratic will of the Scottish people”. Parliamentary elections were seen as a test of the mood of the desire for independence.

Another election victory for SP

This is the fourth consecutive election victory in Scotland for the SNP. Sturgeon announced that promoting a referendum. A bill is already in the drawer. sturgeon wants Bringing an independent Scotland back to the European Union.

Johnson again rejected a new referendum. A referendum is “irresponsible and merciless”, Johnson told the Daily Telegraph newspaper today. “Now is not the time to fight the constitutional battle and talk of tearing our country apart when people are more concerned with fixing our economy and moving forward together.”

Most experts are of the opinion that the referendum would not be legal without London’s consent. But the results of the general election could increase pressure on Johnson to allow another referendum.

“Boris Johnson is not a feudal lord”

The fact that the SNP missed out on an absolute majority played into Johnson’s hands, British media said. On the other hand, SNP and party experts emphasize that SNP results alone are not conclusive. “Boris Johnson is not some kind of debt of Scotland,” said Deputy Prime Minister John Swain. Rather, it is important for independence to have a majority in parliament – and it is there.

The Scottish electoral system provides compensatory mandates for weaker parties. This makes it difficult to achieve an absolute majority in the Edinburgh Parliament. The Greens reiterated their support for independence.

The major campaign issue was independence. The Supreme Court may eventually decide on a referendum. “If Boris Johnson wants to stop it, he has to go to court,” Sturgeon told Channel 4. The SNP is aiming for a referendum by the end of 2023.