The Scottish Music Parade also toured Ludwigshafen as part of their Germany tour. It goes without saying that a small delegation of eight from the Weidenthaler Whiskey Club was also present there. Top class military shows offered Celtic magic and Scottish joie de vivre.

The participating bagpipe players, drummers, musicians, singers and dancers, all from the Scottish capital Edinburgh, make up the best of what Scotland has to offer. And they were at their best against the backdrop of a replica Scottish castle. One moment the impressive sound of bagpipes and drums roared in the hall, the next a soulful ballad filled with longing and space created a heady silence in the hall.

When guitarists crank up their E-guitars and the entire ensemble sings top hits by Mike Oldfield, Simple Minds, Elton John or Paul McCartney along with their traditional instruments, goosebumps are guaranteed. And when the Scottish anthem “Highland Cathedrale” sounds with a basic cannon salvo and bagpipe players and drummers in their uniforms walk the audience down the aisle, a breath of genuine Highland air blows through the hall.

The audience and its accompanying Weidenthaler whiskey friends were excited about a truly great event. The Scots are welcome to come back, and in the end everyone agreed on that.

Finally, an encore in the foyer of Friedrich-Ebert-Halle 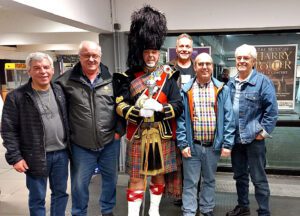