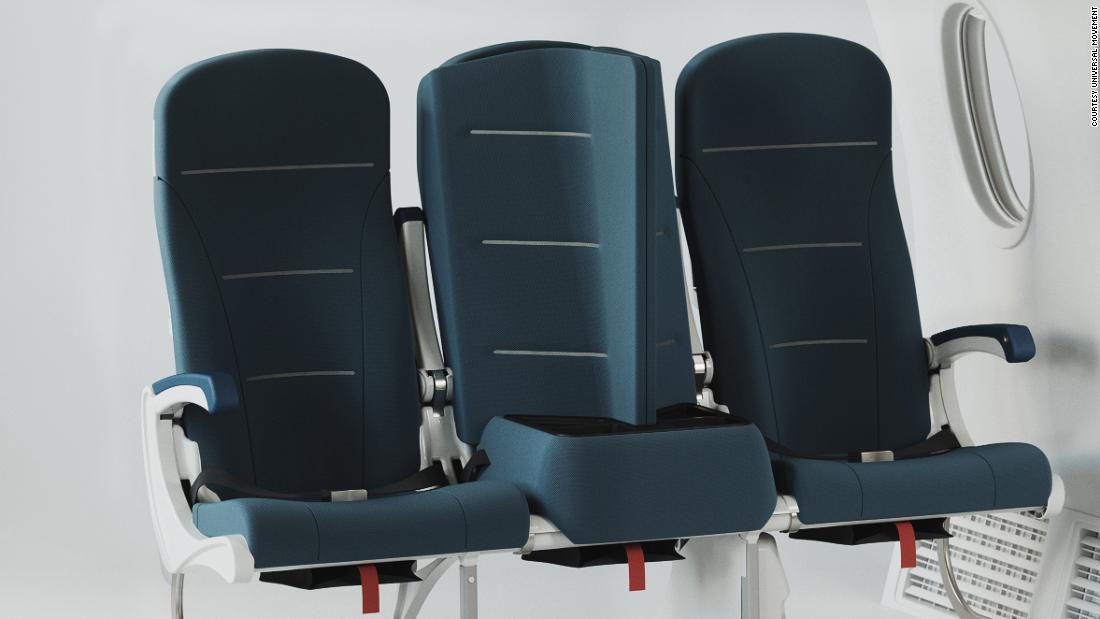 The last off the drawing board is Interspace Lite, presented by Luke Miles, founder of the transportation technology company Universal Movement.

In December 2019, Miles presented for the first time a new seat design called Interspace, designed to make sleep on the economy a little easier thanks to the “padded wings” that fold up from behind both sides of the backrest. CNN Travel has tested the product at its launch in London.

Interspace Lite reworks this design in response to Covid-19. Miles believes it will provide an active solution aboard social distancing.

Like other recent models of aircraft seats inspired by the pandemic, Interspace Lite provides the addition of kits for the central seat of the aircraft. It is based on the idea that airlines will temporarily block middle seats to allow for a better distance, but will not want to permanently change the interior of the cabin.

What sets this concept apart, Miles says, is that the divider that separates the window and the side seat is not a clear screen, which will make travelers feel more comfortable.

Interspace Lite uses the central seat as a divider.

“Suppose we don’t want it to appear medicinal,” says the designer to CNN Travel. “We don’t want to remind people where they are, we just want them to feel more comfortable.”

Ideally, the divider would be made of the same material as the upholstery found on the aircraft seat, although part of the charm is that the seats are retrofittable.

Miles also provided a way for the two passengers on either side of the divider to use the center seat.

“When you taxi, take off or land you have the armrest down, but you can raise the armrest during the flight, and then basically you get what we coined as a cheap 1.5 seat,” he says.

This extra space could work as a place to store items or just give you some space to play with during the flight.

Universal Movement has partnered with the aircraft seat manufacturer Safran to get the concept off the ground.

Miles hopes that aesthetics and features can make you feel comfortable flying again.

In fact, if Miles and his team get their way, you could be on a plane with some Interspace Lite variations before the summer is over: Universal Movement has officially partnered with the aircraft seat manufacturer Safran and aims to bring Interspace to the market soon.

“There are many efforts to make Interspace Lite usable by late summer,” he says.

Quentin Munier, Safran’s executive vice president for strategy and innovation, adds that his company is working on many other concepts that will help make flight in the wake of Covid-19 safe and secure.

It gives the example of a contactless journey, such as activating the tray table with a pedal, rather than with your hands.

The company is also developing a kit called Ringfence, which is a removable partition that could be placed around each traveler’s seat.

The future of the intermediate seat?

Universal movement hopes that the seat will make passengers feel more comfortable during the flight.

Although many of these projects involve reimagining the plane’s central seat, on May 5, the International Air Transport Association (IATA), which represents carriers around the world, released a statement suggesting that the seat lock intermediate was not something that supported.
“Airlines are struggling for their survival. Eliminating the central seat will increase costs,” said Alexandre de Juniac, IATA general manager and CEO. the statement. “If this can be compensated for by higher fares, the era of affordable travel will come to an end. On the other hand, if airlines cannot recover costs at higher fares, airlines will fail. Nor it’s a good option when the world needs strong connectivity to help kick-start the recovery from COVID-19’s economic devastation. ”

But Munier believes Interspace Lite is workable and suggests that couriers agree. It will not give names, but says airlines were in contact with the universal movement after the launch of the original Interspace seat in December and discussions remain ongoing.

“Time is of the essence,” he says. “We have identified the right technology, the right resources and ways to achieve it.”

“We want to make people fly again and we want people to feel comfortable. The sector has been knocked down,” adds Miles.