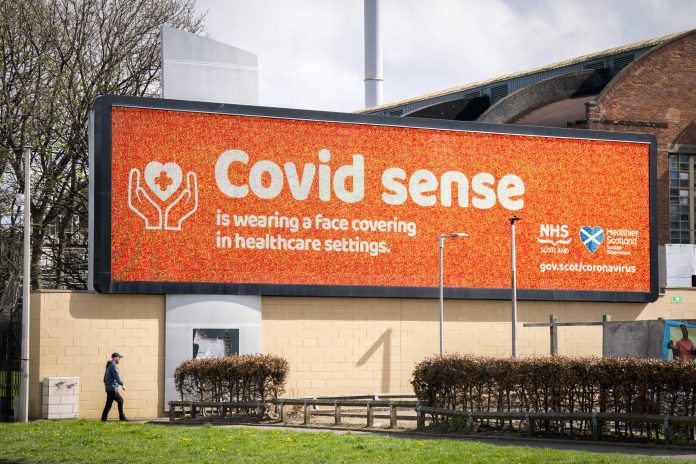 “The Scottish government finally accepts that wearing masks is harmful,” various posts said in early November Feather Wire and Facebook. A “joint campaign” has achieved that “the routine of wearing masks in social facilities” should be abolished. Over 70,000 users saw the claim on Telegram alone.

post refers to a Article of british blog The Daily Skeptic From 2 November. The text was explicitly translated from English to German. a Tweet editor-in-chief of The Daily SkepticToby Young that the Scottish government has “finally realized that wearing masks is harmful” and a campaign to “end the recommendation to wear masks in care homes” has been shared more than 2,000 times.

But the claim is misleading. The Scottish government has said it has made no such statement and continues to emphasize that masks are effective in preventing COVID-19. A spokesperson told us it was clear that “face masks are and will remain an important preventive measure against the spread of COVID-19.”

Feather 7 september The Scottish government announced that masks are no longer mandatory in the social care sector. in the article The Daily Skeptic It says the new recommendations were a “direct response” to the meeting.

However, this is not clear from the response from the Scottish Government and Alzheimer’s Scotland to CORRECTIV.Faktencheck. You write to us that the updated recommendations were based on a number of recommendations and experiences. The meeting took place while the government was discussing recommendations for new masks due to the sharp drop in COVID-19 infections.

as the Scottish Government 7 september Announced in a press release that the country’s successful vaccination campaign was due to be easy. This has reduced COVID-19 infections, so the aim is to re-simplify communication in the care sector. From now on visitors and nursing staff will no longer have to wear masks. health workersFor example, in hospitals and medical practices, it is still recommended to wear a mask. government recommended People over the age of 12 also continue to wear masks in closed public places and on public transport.

The blog’s claim that “the Scottish government is finally acknowledging that masks are harmful” is misleading. Neither Alzheimer’s Scotland nor the government have used the word ‘harm’, but have told us that masks can be harmful in some situations.

According to Alzheimer’s Scotland, there is “little doubt” that masks affect the quality of personal care for people with dementia, as “the wearing of masks severely limits non-verbal interactions with staff”.

The Daily Skeptic According to the article’s author, Valerie Nelson, used the term harm to refer to common circumstances that negatively affect vulnerable adults. However, this definition is as misleading as the title of the article is, without reference to the specific circumstances brought to attention by the Government and Alzheimer’s Scotland. In his writings, Nelson also claims that a result of the Round Table Conference was a so-called “status statement” that clearly identified “harm caused by wearing a mask”. However, when we asked, Nelson refused to provide this paper. Our inquiries from Alzheimer’s Scotland regarding the paper have so far remained unanswered.

Misleading claims are constantly circulating that wearing a mask is dangerous, as we did in a April Fact Check informed of. At the time, it was being claimed that masks would lead to an increase in deaths. However, the study on which this claim was based could not prove such a causal relationship. several studies On the other hand, confirmed the basic effectiveness of the mask in preventing COVID-19 infection.

The most important public sources for fact checking: