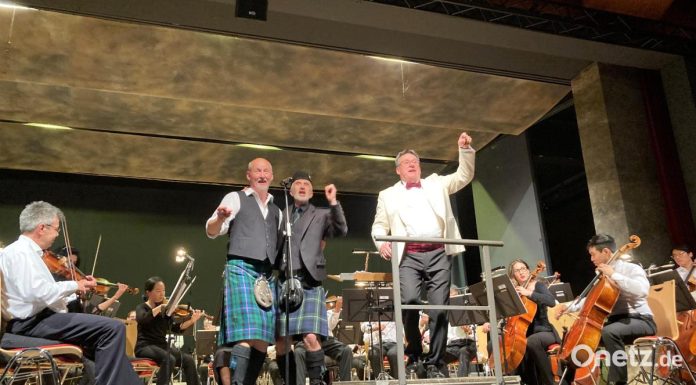 The Hofer symphonicer with Richard Morrison, Duncan Matthew McKelvie and Russell Harris (standing from left) delights the audience at the concert “The Music of Scotland – Journey to Scotland” at the Kettlerhaus.

Actually, “The Music of Scotland – Journey to Scotland” was planned as a New Year’s concert. The pandemic has led to the postponement of the performance of the Hofer Symphoniker as an additional event for the Tirschenreuth Garden Days. A regular guest in the District City, the ensemble offered a varied, entertaining program in a class last Saturday. In the first half, the musicians delighted the audience with an opera aria, musical medley and an English hit by Richard Tauber, performed by powerful-voiced baritone Richard Morrison. Born in Scotland, he was the ideal performer for this musical excursion to the northernmost part of the British Isles.

After the break, the wardrobe and style changed: the musicians returned to their seats casually and without a jacket, the singer appeared in an elegant tartan skirt, complete with double, calf stockings and traditional lace-up shoes. Now predominantly Scottish folk songs and dances were performed, with Morrison donning brisk highland jumps and dance steps in a bobbing tartan pleated skirt – much to the enthusiasm of the audience, who now clapped loudly.

The whole evening was moderated and explained by the well-witted British conductor Russell Harris. He made fun of his musicians just like the audience, and their mood quickly rose. Harris animated himself in amusing dance steps and hops to entertain the guests. The main attraction and surprising surprise was the appearance of bagpiper Duncan Matthew McKelvie, a native of Inverness, who was not announced at the event. They played the world famous song “Auld Lang Sin” (roughly: “To the Good Old Days”), the secret national anthem of the Scots, with a penetrating sound. There was no stopping the audience when Richard Morris joined in, deeply moved, and the two Scots performed a light-hearted pas-de-deux on the floor. Standing ovations, enthusiastic whistles, applause and cheers – the Kettlerhaus shook.