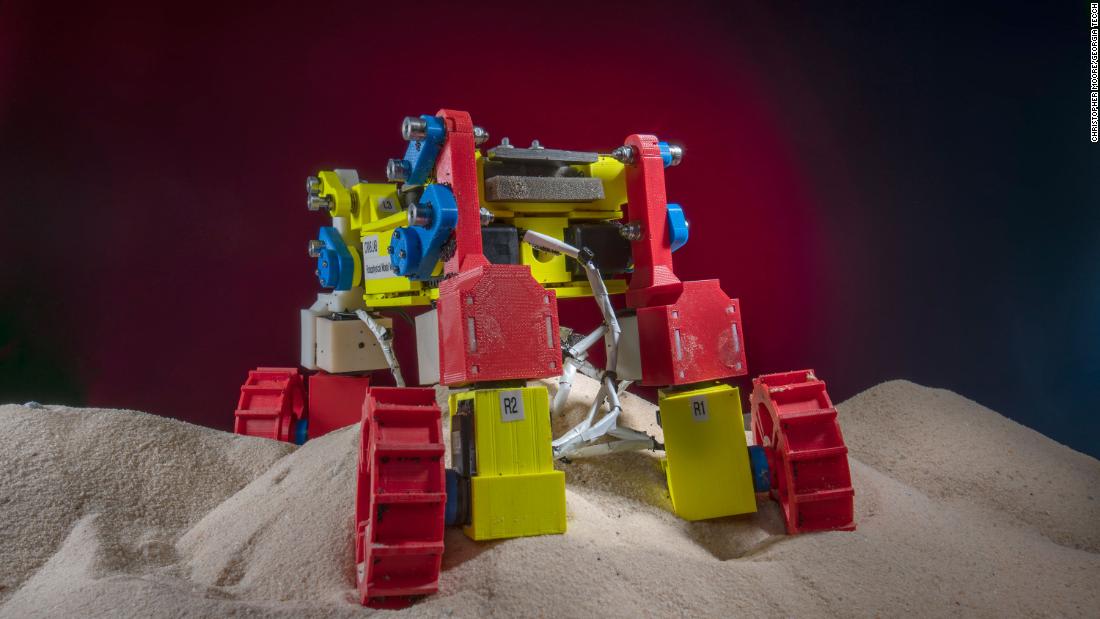 But the “Mini Rover”, a 3D printed small scale model of a NASA rover concept, built and tested by researchers from the Georgia Institute of Technology, has a pace that allows it to crawl and successfully conquer difficult terrain.

Its origins go back to 2009, when NASA’s Spirit rover got stuck on soft ground on Mars and couldn’t be moved. It was used as a stationary science platform for three months until the rover stopped communicating in March 2010. The mission was officially ended by NASA in 2011.

The soft granular soil, known as regolith, acts almost like a fluid when it has been disturbed on Mars, which means it is easier to get stuck in it. (The moon has a similar terrain.)

The concept involved a rover that allowed the rotation of the wheel combined with a lifting and sweeping movement of the rover’s legs. But the mission itself was canceled in 2018.

Supported by the NASA National Robotics Initiative and the Army Research Office, Georgia Tech researchers proposed building and testing a miniature version of the rover made from 3D printed plastic. They dubbed this small-scale RP15 the Mini Rover.

“Our design goal was to replicate the RP-15’s functionality on a scaled robot that we could operate on our instrumented test stand,” said Siddharth Shrivastava, author of the study and university student at the George W. Woodruff School of Mechanical. Georgia Tech Engineering, in an email to CNN.

Although the robot is not an exact replica of the larger rover, which has motors encapsulated in the wheel diameter and a greater weight-to-power ratio, the Georgia Tech team has been able to replicate the lifting, sweeping and rotating movements of the wheel. . These movements were fundamental to their tests. Their model, made with internal 3D printers, is equipped with four-wheel legs powered by 12 motors.

Once the robot was assembled at Georgia Tech, it was time to test the Mini Rover on flat, slanted poppy seed beds. Although not exactly an analog of the surfaces that these rovers might encounter on other planets, the 1mm seeds have a number of features that make them suitable for experiments.

“Poppy seeds are a rather useful granular medium for laboratory experiments with robots,” said Andras Karsai, coauthor author and PhD candidate in Georgia Tech School of Physics, in an email to CNN.

“They are soft enough to safely crush between moving robotic joints if they are blocked and they do not produce harmful dust.”

The researchers started by subjecting Mini Rover to the same gait movement tests that RP15 experienced at the Johnson Space Center and also explored ranges of movement that only the smallest rover could perform due to its small size.

If only the wheels were activated, the robot would slide over the poppy seeds and sink. When the broad movement of the robot’s legs was added, the Mini Rover was able to use this exclusive method of locomotion to wallow in the poppy seeds as they moved unpredictably. This prevented the rover from sinking more by creating mounds of seeds to his advantage which he could climb over.

This large, raised movement on wheels created a successful crawling movement for the rover, even when one of his limbs was intentionally disabled. This crawl was dubbed “rear rotator pedaling” by researchers.

“When bulk materials flow, this can create problems for robots moving through them,” said Dan Goldman, co-author and Dunn family professor at the School of Physics at the Georgia Institute of Technology, in a statement.

“This rover has enough degrees of freedom to be able to get out of the jams efficiently. Using materials from the front wheels, it creates a fluid localized hill for the rear wheels that isn’t as steep as the real slope.”

Disabling lift, sweep or wheel rotation individually hindered the rover. But the combination of all three created maximum efficiency and reduced endurance.

“This was an elegant experiment with clear results: the combination of all three systems was necessary,” said Shrivastava.

The same was true when they tilted the seedbed to simulate the rover climbing steep planetary hills.

“On inclined surfaces, this agitation also helps the media avalanche in the local mounds that the robot rover can get rid of. In short, the” robotics “approach has led to many surprising results, which we could not have foreseen only through modeling. “

Overall, the rover was able to continue up the hill. But a robot with only the movement of the spinning wheel would have stopped.

These tests were also conducted at the Johnson Space Center with the full size RP15 rover on a flat, wet sand bed and achieved the same results that were found with Mini Rover.

Moving forward, the engineers want to test the larger RP15 and Mini Rover on steeper slopes using different terrains and terrain to test more functionality. They also want to add local land surveying, which could help the rover survey its surroundings. Shrivastava is also curious to explore downward locomotion.

The capabilities demonstrated in the study could be used to inform the design of next generation rovers that could visit previously unexplored areas such as the moon’s poles or even difficult spots on Earth, the researchers said.

“The work reported in this document supports the design of rovers to access steep and soft terrains, where scientifically interesting samples and materials may exist,” Robert Ambrose, coauthor author and division head of the software, robotics and simulation division at Johnson Space Center of NASA.

“For lunar exploration, this includes driving in dark craters and regions that are permanently shaded at the poles of the Moon. For Mars it could mean operating on soft sands and other deposits that are insidious to the rovers.”

“Personally, I am anxious to see these strategies adapt beyond the laboratory within engineering groups that develop locomotion platforms for the moon, Mars and beyond,” said Shrivastava. “Aside from the launch vehicles of our species, I believe that robust extraterrestrial locomotion will serve as the basis for future human settlement beyond our planet.”