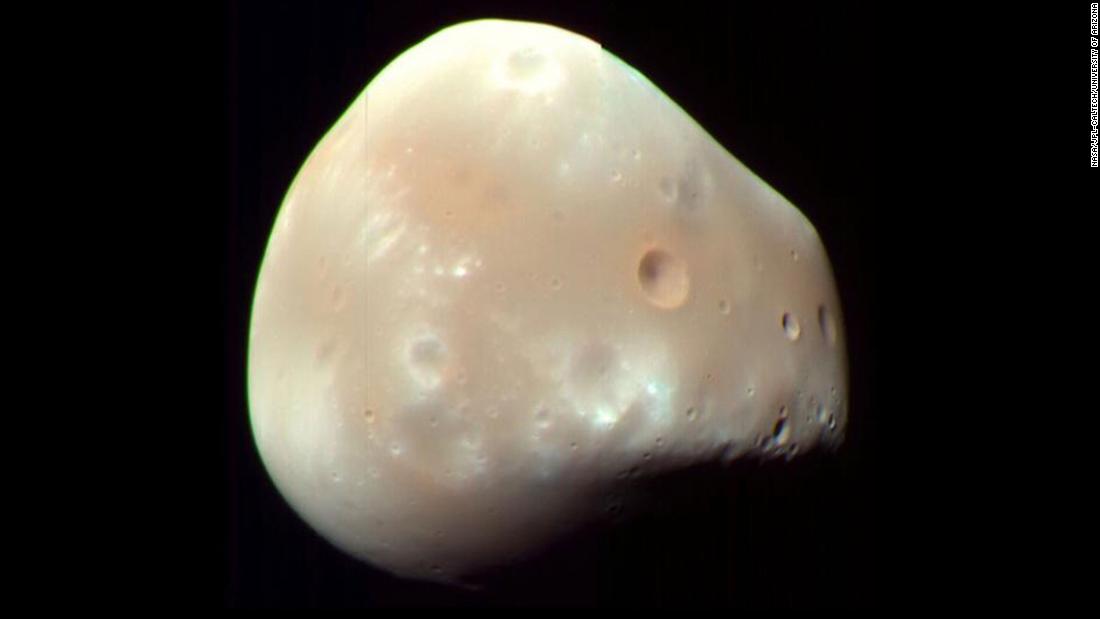 The two lumpy moons, Phobos and Deimos, were both discovered in 1877 and named after the sons of Ares from Greek mythology (Mars is named after the Roman god of war, who is Ares in Greek). Phobos means fear or panic and Deimos means terror.

It has long been thought that they were actually asteroids captured by the gravity of the planet. Both seem to be similar in composition to asteroids of blackish carbonaceous chondrite. But scientists have understood that the moons are almost on the same level as the Martian equator. This suggests that they formed in the same period that Mars made about 4.5 billion years ago.

While both are irregular, Deimos is a bit stranger than Phobos: its orbit is inclined by two degrees.

“The fact that Deimos’ orbit is not exactly in line with the equator of Mars was not considered important and nobody bothered to try to explain it,” said Matija Ćuk, author of the main study and researcher at the SETI Institute. “But once we had a great new idea and looked at it with new eyes, Deimos’ orbital inclination revealed his big secret.”

The results have been presented during the 236th meeting of the American Astronomical Society, which is held practically this week during the pandemic.

A cyclical fate for the moons of Mars?

The researchers looked at Phobos, which loses height while interacting with Martian gravity over time. Eventually, its orbit will be too low and Mars will essentially cut it into pieces that form a ring around the planet. It is estimated that this will happen within 50 million years.

What if Mars once owned other moons that met the same fate? Over time, the rings would form new and smaller moons in an apparently infinite cycle.

Something pushed Deimos off the planet and made him tilt, like interacting with another larger moon.

Phobos, slightly larger than Deimos, is only about 3,700 miles above the Martian surface – no known moon in our solar system is closer to its planet. Being so close, Phobos completes three orbits around Mars in one Earth day, while Deimos, which is more distant, takes about 30 Earth hours to complete an orbit.

What if Phobos wasn’t always, well, Phobos? What if it was once much bigger and went through some cycles in which it went from a moon to a ring and vice versa?

A prominent ring around Mars would have pushed the proto-Phobos outward, away from the planet. This would also have influenced the orbital resonance of proto-Fobos with Deimos and would have pushed him further from Mars.

The Japanese space agency, JAXA, plans to send a spacecraft to Phobos in 2024 to collect samples from the surface and return them to Earth. This may reveal more about the moon’s past.