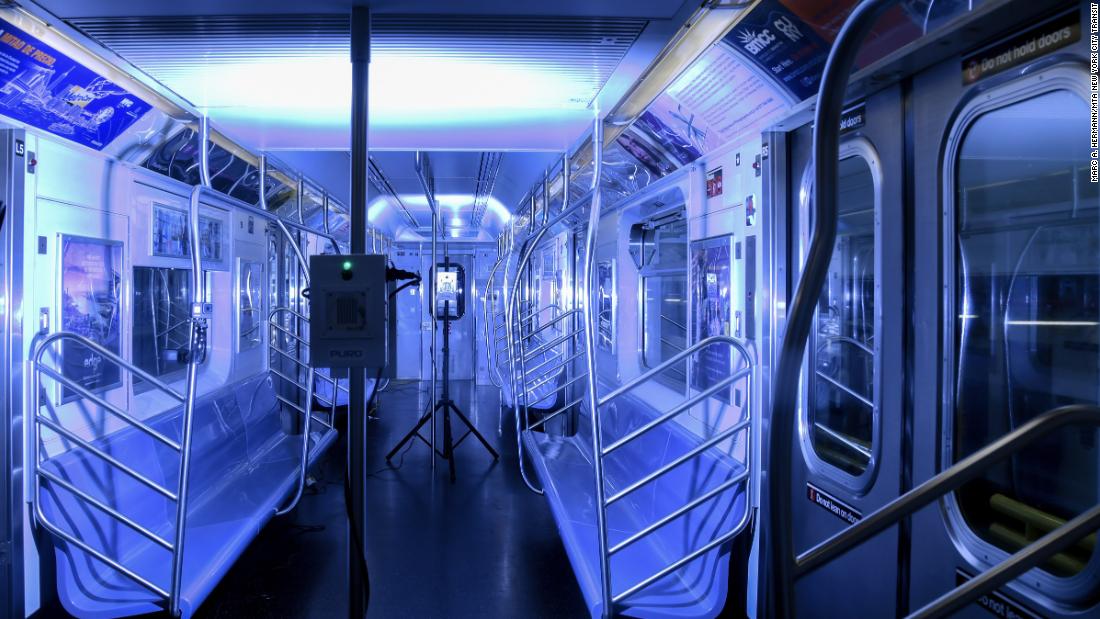 The Metropolitan Transportation Authority said Tuesday evening that it will use “150 double-headed mobile devices” from the Denver-based start-up PURO Lighting to determine the efficiency and cost-effectiveness of UVC light technology. stated the agency in a press release.

UVC, which is one of three types of light on the UV spectrum, has been shown to eliminate Covid-19 and is more powerful against viruses and bacteria, said PURO Lighting. PURO noted that their lamps also have UVA and UVB for full spectrum disinfection.

The first phase is scheduled for launch on subways and buses and al Transit facilities early next week, the MTA said, and if successful it will expand to Long Island Rail Road and Metro-North Railroad trains in a second phase. The two railways serve the suburbs of New York City.

The lamps will be used during the night shutdown on the subway trains and during periods when the transit is out of service.

“This is a first pilot of its kind when it comes to transportation agencies around the world and we are proud to be part of it,” said Patrick Foye, President and CEO of MTA. “For almost three months, the MTA has worked tirelessly to disinfect our entire fleet of subways and buses, but we have always promised that we would explore all the new approaches available to us too. The launch of this UVC pilot represents a promising next step. in our ongoing efforts to identify technologies that can keep our customers and employees as safe as possible. “

For the first time in its 115-year history, New York City has deliberately shut down its entire subway system overnight since May 6 to clean all its cars.

A doctor will examine the efficiency of the lamps

The MTA claims that UVC light is “an efficient, proven and effective technology for eliminating viruses, including SARS-CoV-2 which causes COVID-19” and has been shown to kill viruses in hospital operating rooms, clinics first aid, in universities, and fire stations. The first phase will focus on the rolling stock of cars, stations and construction sites, said the MTA, as well as on professional facilities, crew rooms and other shared areas.

The disinfectant lamps for lighting use high intensity and full spectrum UV lamps that can be installed on a ceiling or wall, according to a press release from PURO Lighting. The photos of the MTA show the units mounted on poles in the middle of the car. The unit disinfects both surface and airborne pathogens and eliminates up to 99.9% of viruses and bacteria, according to PURO Lighting.

The MTA also noted that the agency asked dr. David Brenner, director of Columbia University’s Center for Radiological Research, examining the efficiency of the lamps. This week, Dr. Brenner reported that his test showed that UVC light has eliminated Covid-19 and is working on conducting further tests for peer review publication, the MTA said.

The MTA started working with PURO in mid-March to test the ability of light technology as part of an effort to find efficient cleaning solutions for the metro. The agency also tried to use antimicrobials to disinfect and prevent virus growth for longer periods of time. Foye said in a interview with PIX11 on Friday they are continuing their research with antimicrobials, which is “very promising”, and expect “some short-term positive news”.
See also  Senate confirms President Trump's 200th judicial nominee