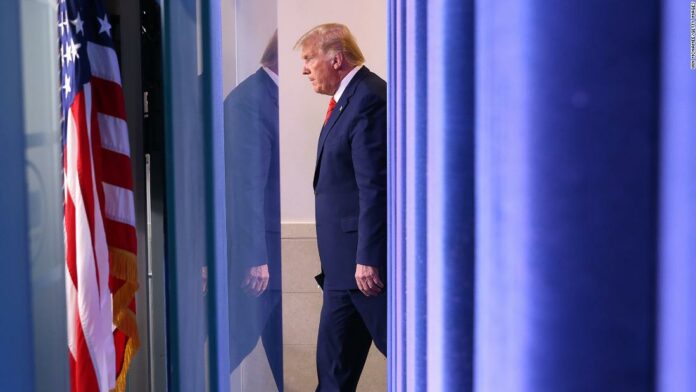 Addressing reporters after returning from a rally in Pennsylvania, the president said the report was “an outrageous situation.”

“To think that I make negative statements to our military when no one has done the work done with the budget and the military budget. We are getting a pay rise for the military. It’s a humiliating situation by a magazine that” it’s a terrible magazine, I Don’t read it, ”he said.

CNN has not independently confirmed the Atlantic report.

The Atlantic specifically reported that Trump did not want to attend a ceremony at the American Cemetery in Bellewood Wood ne Sne-Marne, France in 2018, because he was worried that the rain would blow his hair.

CNN reporters in France said during the president’s visit that local weather reports showed low ceilings and heavy rain in the cemetery area, and officials said at the time that there was no time to set up French security to cover the long haul. Motorcade road.

Trump insisted Thursday evening that the Secret Service had stopped him from attending the ceremony.

“I was ready to go to a ceremony. I had only two of them. The other day, it was pouring and I was going. It wasn’t flying because it was raining as hard as I had ever seen.” And on top of that, it was very foggy and the helicopter was unable to fly, ”he said.

Trump told the Secret Service, “I was told you can’t do that. I said I have to do it, I want to be there.”

Trump said he then “called home, I talked to my wife and I said, ‘I hate this. I’m here to go to that ceremony.’ And the next day I went to him. I said I was horrible. And that was the end of it. “

With the hefty comments made by current and former administration officials earlier in the day, the report clearly summed up some of the strongest pressure exerted by the White House against the media report, a clear indignation of the president.

Democracy nominated Biden’s campaign Using the report to condemn Trump on Thursday evening, he said in a statement that if the article was true, it was “another sign of how deeply I disagree with the role of President Trump and the president of the United States.”

Trump pushed back on the report that he was late Sen. John McCain was insulted, and admitted that he was “never a fan,” but insisted that “he is still respected.”

“To claim that what someone is saying, I said is a complete lie.” “Would an animal say anything like that?”

Later Thursday, Trump falsely tweeted that he had never considered McCain a loser. As a presidential candidate in 2015, Trump said in Iowa Townhall, “I don’t like losing,” in reference to McCain’s 2008 presidential election defeat.