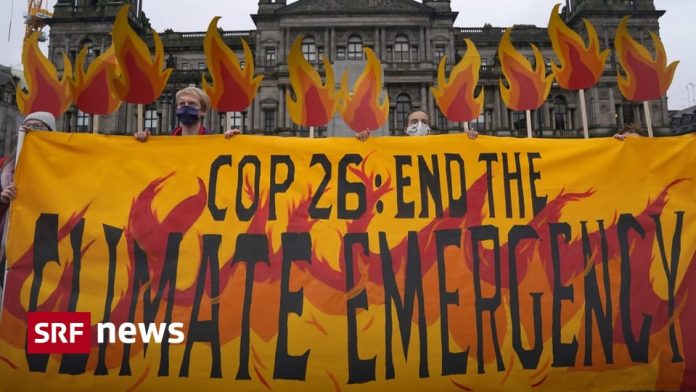 The United Nations Climate Change Conference COP26 will take place in Glasgow over the next two weeks. The most important questions about this climate summit.

What should COP26 achieve? Climate disaster to be averted at the last minute at the climate summit in Glasgow. It sounds dramatic; But it is – from the point of view of UN Secretary-General Antonio Guterres. Last Tuesday, he warned once again that the world would be headed “directly towards climate catastrophe” if nothing is done. Guterres warned that the Earth could heat up to 2.7 degrees if no further, drastic steps were taken.

COP is an abbreviation for “Conference of the Parties” of the States Parties to the United Nations Climate Convention. The Framework Convention was adopted in 1992. Since then, an annual conference has been held to take stock and discuss the next steps. Glasgow hosts the 26th Annual Convention. Hence the name COP26.

That’s exactly what is to be done in Glasgow: the contracting states of the United Nations Climate Conference are to agree on new, more ambitious targets to emit fewer greenhouse gases into the atmosphere around the world. This is the only way to stabilize global warming to below 2 degrees compared to pre-industrial times – as agreed in Paris in 2015.

Can climate change still be stopped? Yes, say the optimists. This is very demanding and can only be achieved by joining forces and acting quickly. About 200 countries have committed themselves to the Paris climate goals, but so far there has been virtually no progress with their implementation. By 2035, greenhouse gas emissions should be halved and stopped completely after 20 years. But hardly any country is on this path. Not even Switzerland. The transition from fossil fuels to renewable energy sources such as coal, gas and oil is not happening as fast as expected. In many countries, necessary legal adjustments are stuck – for example for stimulus taxes or funding programmes. Optimists hope Glasgow will give new impetus to the effort.

See also  The US Air Force is removing height limits for pilots, paving the way for more women to serve

Pessimists see black. Climate change cannot be brought under control at the current pace. Earth is at risk of overheating, extreme weather events such as storms, heavy rains, floods and droughts are prone to become more frequent – ​​and planet Earth is at risk of becoming uninhabited in many areas. The result would be humanitarian crisis, famine and large numbers of refugees.

Who are the biggest climate sinners? By far the most CO2 is emitted in China and the United States – due to their large economic output. China emitted about 12 billion tons of greenhouse gas in 2020. This accounts for about a third of global CO2 emissions. About 5 billion tons of CO2 are generated in the United States. India ranks third with 2.4 billion tonnes. But the picture is misleading: China, the US and India are really the workplaces of the world. Consumers around the world are partly responsible for the fact that greenhouse gases are produced along with their purchasing behaviour.

And if the “sinners” are not listed by country and gigaton, but by income group and share of the increase in CO2 emissions, a very different picture emerges: it is prosperous in Western countries. According to Oxfam, the top 10 percent of earners accounted for 46 percent of the CO2 increase since 1990.

Who is attending the Climate Summit? Heads of state and government from around 120 countries are expected to open COP26 in Glasgow on Monday and Tuesday. Federal President Guy Parmelin will also take part in the Leaders Summit. The guest star will be US President Joe Biden. Biden thus marks the return of the United States to the Paris climate agreement. And since his election, he has presented himself as a “good cop”, giving new impetus to the fight against climate change. But even Joe Biden is not making as much progress in his country with his climate program as he had hoped.

And who doesn’t? A key absentee in Glasgow is likely to be China’s President Xi Jinping, who will probably join via video. Many see them as “bad cops” who see their country as a victim, not a co-factor of climate change – and are more vulnerable to developing and emerging countries than to highly developed, Western countries. for less stringent climate targets.

What can I do for the climate personally? Reconsider your own consumer behavior – for example the choice of means of transport, as our mobility is responsible for a large proportion of greenhouse gases. Whatever is put on the plate has a more or less effect on the climate. Summer strawberries from the organic farmer next door are certainly more climate-friendly than Christmas strawberries from Spanish Greenhouse. And finally: Heating, clothing and living style also have an effect on climate.