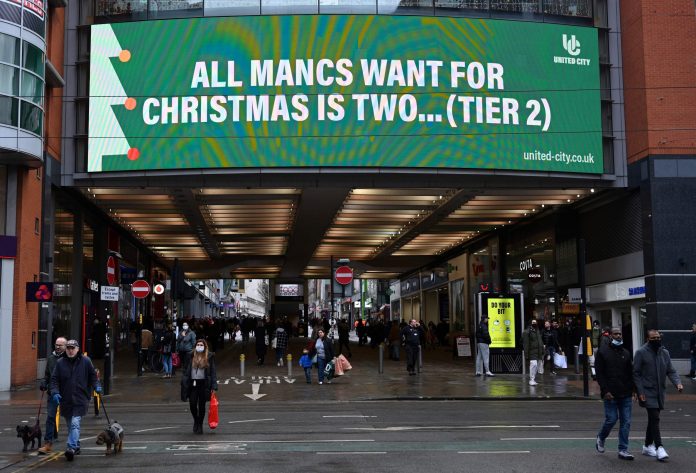 Greater Manchester is eagerly awaiting to find out if it will go down two levels on Saturday.

Local leaders, including Mayor Andy Burnham, are pushing hard for the move.

Despite much resistance from Mr Burnham, Greater Manchester were placed in the first leg at the end of October, and returned to the top immediately after the lockdown ended on 2 December.

Pubs and rest restaurants in the region have been closed for months, but there is little hope they will be allowed to reopen before Christmas.

Will Manchester go down two levels?

Manchester’s figure was slightly higher in the same period – 176.9.

Some parts of Greater Manchester are significantly lower, especially Trafford and Temasside, both of which were below 100.

On the other hand, both Burrie and Rochdale have reported more than 200 infections per 100,000 people, and Wigan rates are also high.

This means that Greater Manchester is unlikely to see up to two levels below the blanket.

However, the sector is likely to split.

Government ministers, including Boris Johnson, are meeting on Wednesday, December 16 to review the tires. Any move is then announced during a television press conference that evening.

The changes will take effect on Saturday, meaning they will remain in place for four days before the nationwide ban is eased over the Christmas period – however, the festive bubble is now in jeopardy.

What have local leaders said?

Mr Burnham said he believed there was a “strong case” for Greater Manchester to go two levels.

“We’ve had sanctions coming in for five months and I think we’re giving the government a little hope and thinking of rewarding the good people of Greater Manchester who have complied with the sanctions.”

The leader of Manchester City Council, Sir Richard Lees, added: “We will push very hard for the whole of Greater Manchester to come second.”

However, Oldham, Bury, Thameside and Rochdale councils have all said they want to stay in three levels.