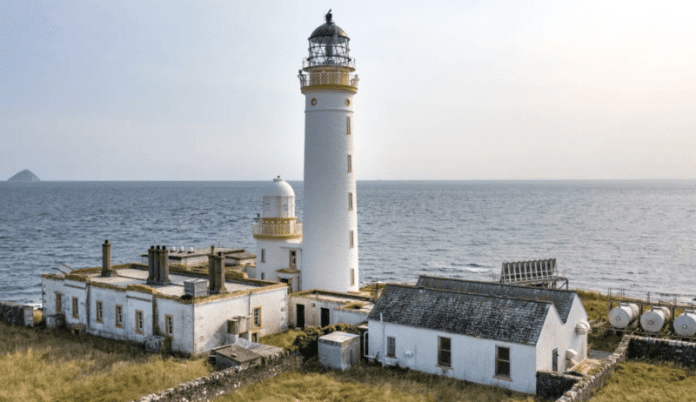 You can currently buy Plada Island, a private island with your own lighthouse for around 440,000 euros.

The island occupies approximately 280,000 square meters of land and consists of a five-bedroom house.

There is also a garden of 25,000 square meters as well as a helipad and a stone pier for boat transport.

You can currently buy Plada Island, a private island with its own lighthouse, for the equivalent of around €440,529. The property, offered by Knight Frank Estate Agency, is less than a mile from the Isle of Arran.

The island of Pladda is approximately 280,000 square meters.

The island is 31 miles from Glasgow.

There is a lighthouse on the island, which was completed in 1790.

The lighthouse was fully automated in the 1990s and is now remotely monitored from the Northern Lighthouse Board headquarters in Edinburgh, Scotland. According to a Knight Frank representative, the traditional lantern and lens have been replaced with solar-powered LED lights at the top of the tower.

The island has a five bedroom house.

The former lighthouse keeper’s home includes two living rooms and a bathroom, as well as a kitchen and a freezer room. Knight Frank’s listing states that the house has not been used for years and “needs an update”.

There are also two modern outbuildings on the property.

The outbuilding contains another bedroom, a kitchen, a living room and a shower. There are also additional outbuildings currently used for storage.

Within the island is a walled garden which is over 25,000 square metres.

Its high stone-walled garden was formerly used for the former lighthouse keeper to grow fruits and vegetables.

See also  In Plouhyneck, the Union of Brittany Scotland is looking at the future - Plouhyneck (29)

Plada Island can only be reached by boat or helicopter.

It has a stone pier and a helipad.

The island is an important breeding ground and habitat for many migratory sea birds.

According to Knight Frank, over 100 species of birds have been counted on the island of Pladda. Large breeding colonies include arctic terns, turnstones, shags and a variety of gull species.

From Pladda there are wonderful views of the southern coast of the Aran and Northern Ireland.

Kildonan, the nearest village to Aran, has a village shop, post office, campsite and hotel.

Nearby Aran offers spectacular views and lots of outdoor activities.

Fishing, mountain biking, rock climbing, sailing, golfing, walking and diving are all available on Aran in case you need a break from the remote life of Pladda.

And the surrounding sea is full of dolphins.

You can also spot basking sharks, otters and occasionally a colony of seals.

This text was translated from English by Lisa Ramos-Dosse. you can find the original Here.