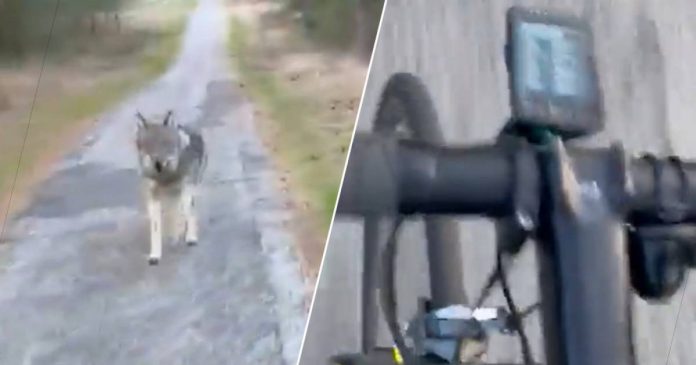 A wolf chases a cyclist in De Hoge Veluwe National Park in the Netherlands. A video filmed from his bike is doing the rounds on social networks. According to experts, now the animal has become accustomed to humans, which can cause problems. The province of Gelderland allows wolves to be shot with paintball guns as a deterrent.

In the pictures, a man can be seen going on a bike path through the forest. Suddenly a wolf appears on the left. The animal emerges from among the trees and follows the cyclist slightly. The latter tries to scare him by raising his voice before intensifying again. Glenn Leliveld of Meldpunt Wolven (Wolf Hotline) confirms that the animal seen in the clip is in fact a wolf.

It is not known who made this video and when. But we know where it was filmed. It is a popular cycling route for visitors to De Hoge Veluwe National Park in the Netherlands. Recently, another video in which a wolf can be seen coming a few meters away from a family with children was filmed in the same park. Chances are it is the same animal.

The wolf is an internationally protected species, even though it reaches areas inhabited by humans. Therefore it cannot be disturbed, chased or killed. But the Law on the Conservation of Nature nevertheless provides for the possibility of action against the so-called “problematic animals”.

Thus, provincial guards are now authorized to intimidate heavily intruded specimens using paintball guns. “If predators are touched, they will hopefully learn to stay away from people,” a spokesman said. Paintballs are biodegradable, but the color stays on the fur for a while. To determine whether the remedy is useful or not.

De Hoge Veluwe’s management had already sought advice from the province on whether wolves were eating sheep in the park and disturbing biodiversity. Last week, the park also reported that one or more specimens exhibited “unnatural behavior” and sought contact with humans. The animal welfare organization De Faunabeschering suspects that employees have intentionally tamed one or more wolves by luring and feeding them. behavior punishable by law.

Also in Flanders, paintball guns have been designed in case the wolves come too close to the walkers. Note, however, that there is currently no reason to use them. “By hitting it with a paintball, the wolf will again associate people with danger,” says Wolf policy coordinator Dris Gorrison. “A paintball won’t hurt the animal, but it will give it a pain stimulus. We think it’s a great way to teach young people to be afraid of humans. This is how abnormal behavior can be solved.”

A jackal seen in Limburg? “Too small for a wolf, too big for a fox”

See also  Larry gets stronger; Could become a major hurricane, Category 6. till