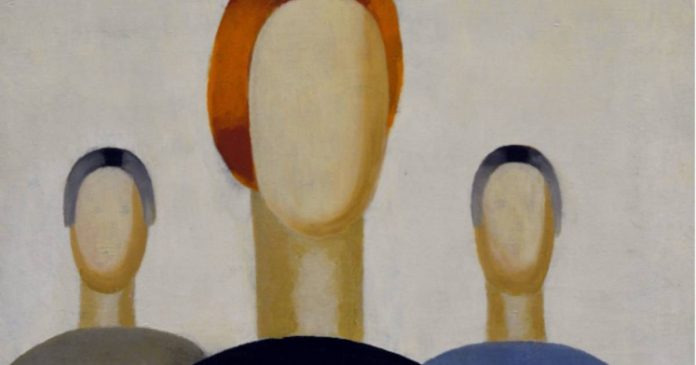 A painting by Russian artist Anna Leporskaya fell victim to the creative impulses of a guard at a museum in Yekaterinburg, Russia, last December. On his first day at work, the man drew eyes with a ballpoint pen on the two faceless figures in the artwork.

Anna Leporskaya’s oil painting “The Three Figures” was exhibited as part of an abstract art exhibition at the Boris Yeltsin Presidential Center in Yekaterinburg. The work, which depicts three characters without facial features, was painted in the early 1930s and costs 75 million rubles (about 900,000 euros). It was loaned for exhibition by the State Tretyakov Gallery in Moscow.

In early December, two visitors to the exhibition noticed an “extra” in the painting, who immediately alerted a member of staff. Two of the three figures in the painting suddenly developed pen-scribbled “eyes”. According to the director of the Yeltsin Center, the fault lies with a guard from an external security company. According to the statement, the man allegedly drew on board in “a fit of temporary insanity” and was fired. Anna Reshetkina, the curator of the exhibition, was able to confirm that the guard had used “a pen from the Boris Yeltsin Center”.

According to the specialty site Art Newspaper, the ink has penetrated slightly into the pictorial layer of the painting. “Fortunately, the barbarians drew without strong pressure. As a result, the relief of all brushstrokes is not broken”, it is indicated. Restoration specialists of the Tretyakov Gallery estimated the cost of restoration work at 250,000 rubles (about 3,000 euros) Put it.

The incident was not reported to the police until about two weeks later, on 20 December. The Ministry of the Interior in Yekaterinburg initially refused to launch an investigation because the damage was deemed “insignificant”. When the Ministry of Culture condemned the lack of action, it was only then that the police launched an investigation. The offender can now face a fine and up to three months in jail.