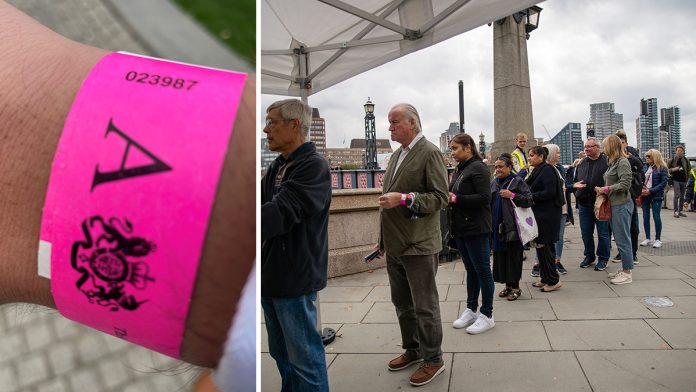 The precious, red bracelets used to go to the queen’s coffin to meditate have already become the subject of speculation.

It’s no big surprise, for the past few days all the items paying tribute to the queen have been selling like hot cakes on the internet. Especially when they are collectors: Magazines, Barbie, Mugs, … And surprisingly added to the list: Red paper wristbands given to pay tribute to the Queen. And the resale values ​​are mind-blowing! British sites pinpointed that some of the pieces of paper were sold for the nominal amount of $350.

It is important to note that these wristbands are not used to save time in line, they are merely a means of indicating that you are waiting in line. Here is what the official website says: ,This is a record of the time you joined the queue, By wearing these bracelets, people standing in the queue go out to drink alcohol or go to the toilet. That’s why these colorful bracelets are just collectibles.

waiting more than 24 hours
Since Wednesday, the Queen’s remains have been on public display at Westminster Hall. And his coffin will remain there until Monday morning. So several million people are still expected to come and pay their last respects to the Queen, who died this Thursday, 8 September at the age of 96.

See also  A woman accidentally found a diamond worth $2.7 million while collecting garbage