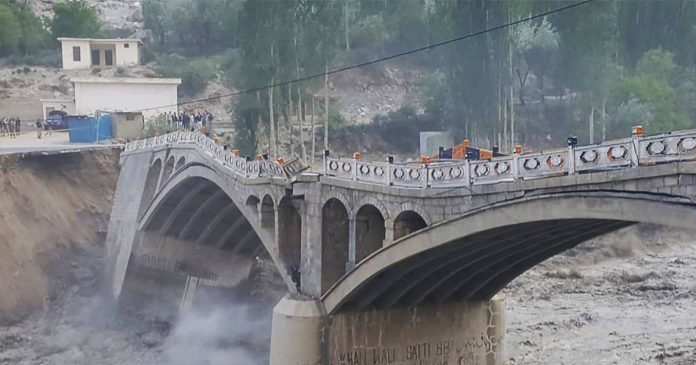 A bridge on a major road in a remote region of northern Pakistan collapsed in flash floods caused by a glacier break caused by a heat wave, the Minister for Change said on Tuesday.

According to a study by NGO Germanwatch, Pakistan is very vulnerable to climate change, ranking 8th among countries most at risk from extreme weather events. A record heat wave, which experts attribute to climate change, is currently hitting the country, where temperatures could reach 50 degrees this week, according to forecasts.

Mrs Rehman said that a bridge collapsed on Saturday in Hasanabad village of Gilgit-Baltistan region due to a sudden collapse due to a glacial lake (Gloff, according to the English abbreviation).

A glyph occurs when an ice dam of a glacial lake suddenly breaks, causing waves to flow down the slope, sweeping away everything in their path.

A video shows the Hasanabad Bridge on the Karakoram Highway (KKH), a mountain road connecting northern Pakistan with western China, collapsed by the force of the current.

Pakistan has more than 7,000 glaciers on its territory, more than any other country on Earth outside the polar lands.

However, glaciers in Pakistan’s north, in the Himalayas or the chains of the Hindu Kush, are “melting quickly”, warned Ms Rahman.

More than 3,000 glacial lakes have formed in northern Pakistan, of which 33 are at high risk of overflow, said the minister, who believes the current heat wave in the country and neighboring India is a “direct result of climate tensions”.

See also  Coronavirus: What do we know about the Brazilian version P1 that concerns France