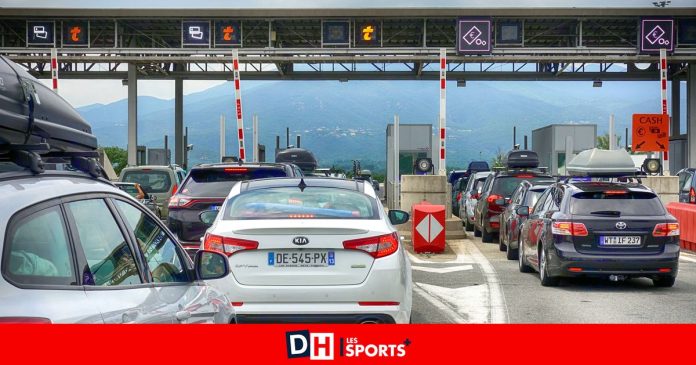 Be careful to pay: Motorists will have to organize themselves if they want to avoid fines for taking the A79, the first toll motorway in France without a toll barrier, which opens in Allier on Friday.

Long present overseas, this type of “free flow” motorway is set to become widespread in the coming years, with the Normandy Motorway next on the list.

Users will be able to travel at the authorized speed without slowing down or stopping, passing under gates equipped with cameras and sensors that identify their vehicle.

Then they will have several ways to pay, explains Pierre Meu, deputy customer director of Autoroutes Paris-Rhine-Rhne (APRR), the group that turns the 88km national N79 – the dangerous, but free – into the A79 motorway – paying – Beach Montmarault (Allier) and Digoin (Sane-et-Loire).

The simplest solution is to get a classic electronic toll badge, regardless of the supplier.

You can also pay on the new motorway’s site, either once and for all by entering your registration number and bank details, or by paying for each route.

Last Chance: 16 terminals along the highway, which will allow you to pay by card or cash.

“The customer has 72 hours to pay for his trip”, underlines Mr. Meu. Otherwise a fine of 90 euros in the amount of the toll and 375 euros will also be imposed without payment within 60 days. The operator will have access to the file of the European license plate.

Going hand in hand with the development of digital and online payments, the adoption of free flow was requested by the state when it selected APRR (a subsidiary of Eiffage) to manufacture the A79.

All new motorways will follow this model as the future A69 between Toulouse and Castres, notes the manager.

The system is widespread in many countries, between Johannesburg and Pretoria in South Africa, around Toronto in Canada, on the urban highways of Santiago-de-Chile, in several US states, on the Autostrada Piedmontana Lombarda near Milan in Italy. Roads in Norway, on half Portuguese motorways, or even to enter Gothenburg or Stockholm in Sweden.

In France, the Société des Autoroutes du Nord et de l’Est de la France (Sanef) converted the Boulay-Moselle interchange on the A4 motorway into a laboratory in 2019, eliminating physical barriers there.

Despite some incidents initially, “the system has demonstrated its reliability and customers have become familiar with this new payment system”, assured its general manager Arnaud Quemard.

So Sanef has taken the lead in converting the Normandy Motorway, which sees 32,000 cars a day, into free flow.

“On the A13 and A14 between Paris and Caen, there are five barriers, with fairly strong traffic and significant weekend peaks. At each toll barrier, there is a stop with a potential cork”, explains Mr. Quemard.

These barriers will gradually be replaced by gates between mid-2024 and mid-2025. “The aim is to straighten the highway”, returning to nature the 28 hectares – the equivalent of 40 football fields – currently occupied by toll stations, he specifies.

Arnaud Quemard promises time savings, fuel savings and a reduction in CO2 emissions into the atmosphere.

The investment is valued at around EUR 120 million, partly covered by a modest annual increase in tolls. But contrary to what one might think, switching to free flow does not save money.

“Today, at the tolls in Normandy, we have about 150 workers. To operate the same free-flow motorway, we would need about 300”, who will mainly deal with customer relations, says Ms. Quemard.

“We have a major stake in retraining our employees, and we have guaranteed all our toll employees that we will find suitable employment for them”, he underlined.

Among the next motorways to switch to free flow was the Autoroute Blanche (A40) in Haute-Savoie, which the company Autoroutes et Tunnel du Mont-Blanc (ATMB) intended to convert “in the medium term”, citing road quality. holds. Wind in the Arve Valley as the reason.