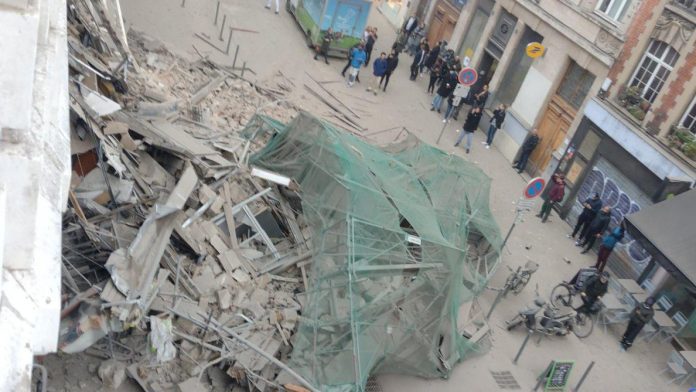 DTwo small buildings collapsed on Saturday morning in a shopping street in the center of Lille in the north of France. According to rescuers, one person may be under the rubble.

While no other victims seem to have been injured by the collapse, the residence was evacuated during the night as a precaution, thanks to a report from a resident who was returning home. Firefighters said one person was slightly injured.

A three-storey building under construction collapsed, causing a neighboring building in Pierre Mauroy, a very busy street in the city, to collapse at around 9:15 a.m., but fortunately before the shops opened. Neighboring buildings were evacuated Saturday morning “as a precaution”.

Firefighters were still in the afternoon clearing the remains of scaffolding on the building’s front, a dusty mix of rubble, bricks and metal beams. And, after thinking for some time that there were no casualties from the fall, they feared that a doctor missing in the early afternoon might be found below.

“We are almost certain that this person is in the rubble,” Lieutenant-Colonel Stéphane Beauventre said in a message broadcast by the Center for Rescue Operations (CODIS). “His phone is not answering, his car is in the parking lot, (…) and he “didn’t come to work this morning,” he said. “We are concentrating all our efforts (…) on manual scavenging to reach this victim. ,

Other firefighters spent the morning checking nearby buildings for any cracks or gas leaks from the collapse. He told AFP that the Lille prosecutor’s office had launched an investigation into “endangering the lives of others”. “A judicial expert has been appointed to shed light on the matter,” the prosecution said.