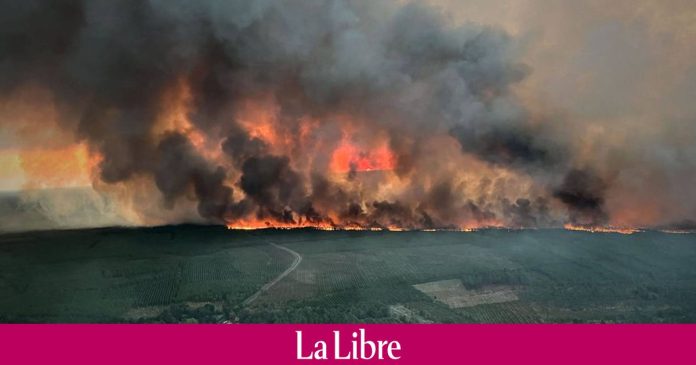 Before it happened Wednesday night, there were eight big fires burning in Gironde, Main-et-Loire, Jura, Drum, Aveyron and Lozre in France… not to mention countless fires smaller from north to south every day.

One of the fires that engulfed more than 330 hectares of forest south of Jura since Tuesday continued into Thursday morning. And while 500 holidaymakers and residents of the villages of Rivire-sur-Tarn and Mostuejoul in Aveyron were evacuated on Wednesday evening, the fire that broke out on Monday was still active.

In Main-et-Loire, the two main fires that devastated more than 1,500 hectares are now settled.

Emmanuel Macron praised “European solidarity”, announcing the arrival of aid from “Germany, Greece, Poland and Romania and Austria in the next few hours”. “Save all lives, save what can be saved, then rebuild: no one will be left behind,” he said on Twitter.

Poland had announced it would send 146 firefighters to fight the fires in the south, which according to the Elysee should arrive on Friday afternoon. Germany plans 64 firefighters and 24 vehicles for Thursday evening.

In Hostense (Gironde), where Prime Minister Elisabeth Bourne and Interior Minister Gerald Dormain arrived, eager to demonstrate a mobilization of power during government holidays, firefighters continued their fight against the resumption of fire from the massive fire of Landiras in July (14,000 hectares burned).

About 6,800 hectares had been ravaged since Tuesday, with 10,000 people being evacuated for a second time, some including 2,000 in the Landes, according to a latest report.

On Thursday morning, a curtain of black smoke covered a portion of the southwest side of the sky, where the fire continued to grow throughout the night.

On the D110, the only road open to traffic, further east, half-burnt plots of pine trees were still smoldering with some embers, of which only the top remained green.

Many evacuated homes displayed banners “thank you for our homes”, “thank you firefighters” painted on white sheets.

“It’s like being in California, it’s huge … yet there’s a wildfire culture” Locally, his eyes indicate that AFP Remy Lahey, professional firefighter from La Rochelle, a career spanning 22 years, “But there we are overwhelmed everywhere. No one can expect that.

According to the province of Gironde, the drought that still prevails in the region and scorching temperatures coupled with very dry air, still poses a “very serious risk of fire outbreaks”.

In the south-west, according to Mateo-France, New Aquitaine has 35 to 39 degrees, locally 40 degrees, but is not spared even in the northern half with 31 to 36 degrees in the rest of the country. . in Languedoc-Roussillon, Auvergne-Rhne-Alpes and PACA.

France has already burned more than 40,000 hectares this year according to the Civil Defense, but according to European satellite data there will be around 50,000 hectares: this is in any case more than three times the annual average of ten recent years, of the others. Like countries like Spain, while the summer is not over.

And no rain is expected before Sunday.

One of the most scientifically verified effects of climate change is that heat waves will multiply, lengthen and intensify. A heat wave is defined by three criteria: abnormally high temperatures, hot nights that prevent the body from cooling down for several days.

Scientists estimate that the number of deaths from heat stress in Europe could double or triple over the course of the century, depending on the extent of global warming.

In Gironde and Landes, Interior Minister Gerald Darminin announced on Wednesday a reinforcement of the means, which now includes “more than 1,000 firefighters, 9 aircraft and two water-bomber helicopters”.

The minister also said that he suspected an act of arsonists as eight very close fires broke out between 8 am and 9 am on Wednesday.

In Landes, the A63 motorway from Bordeaux to Bayonne was cut off in both directions at Saint-Gioures-de-Marme, with the surrounding smoke representing a “risk to users”.

According to the Vinci Motorway manager, the Biriatou toll gate was closed for some time for heavy goods vehicles headed to Bordeaux. Asked about this, Spain’s foreign minister, José Manuel Albers, said he was “going to contact (his) counterpart to see what can be done”.

Eighteen departments, from the southwest to the tip of Brittany, are in orange alert as of Thursday morning, the alert level where residents should be “very alert”. The upper level, red, is not yet activated until mid-July.