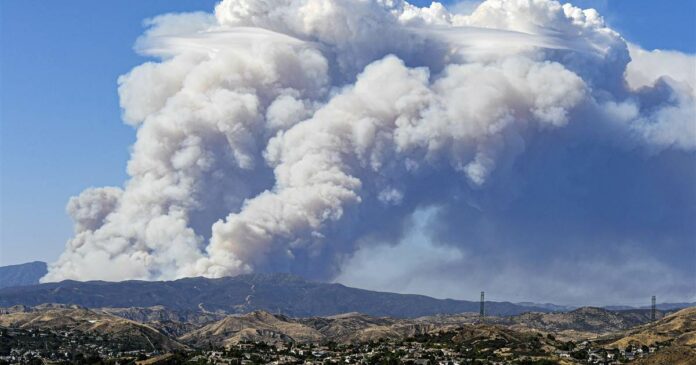 An afternoon brush fire in a rural part of Los Angeles County quickly burned 10,000 acres and sent up a plume of smoke that could be seen from city beaches 65 miles away.

The Lake Fire on federal land in the unincorporated community of Lake Hughes, about 63 miles north of downtown Los Angeles, was first reported at 3:40 p.m., the U.S. Forest Service said in a statement.

Los Angeles County Supervisor Kathryn Barger said about 100 homes needed to be evacuated. The Red Cross Los Angeles said it had organized a temporary evacuation point, a high school where residents would have to stay in their parked cars.

Let our news meet your inbox. The news and stories that matters, delivered weekday mornings.

The fire quickly spread from 50 acres to 10,000 by 6:30 p.m., according to the Forest Service. There was no containment. Several structures were threatened, Forest Service officials said.

At sundown, firefighters grappled with erratic winds, and by nightfall, they were trying to create fire breaks to protect homes in the area, officials said at an evening news conference.

The early evening temperature was 88 degrees, winds were out of the southwest at 8 to 16 mph, and humidity was at a low 17 percent, said National Weather Service meteorologist Lisa Phillips.

Dryness would continue overnight, and winds were expected to pick up to as fast as 25 mph, she said. Temperatures were expected to drop to about 70. A heatwave with triple-digit highs for areas like Lake Hughes was forecast to begin Friday.

See also  A man eats free in a restaurant for six years: the king of "Cimpa" is arrested

The Los Angeles Fire Department said in a statement that it was sending two strike teams, with a third coming from municipal fire departments in Culver City, Beverly Hills and Santa Monica.

The Los Angeles Sheriff’s Department said evacuations would impact residents in the area of Lake Hughes Road west of Pine Canyon Road and south of Dry Gulch Road. It wasn’t immediately clear how many residents were impacted.

There were no reports of injuries or damaged homes.

Dennis Romero writes for NBC News and is based in Los Angeles.