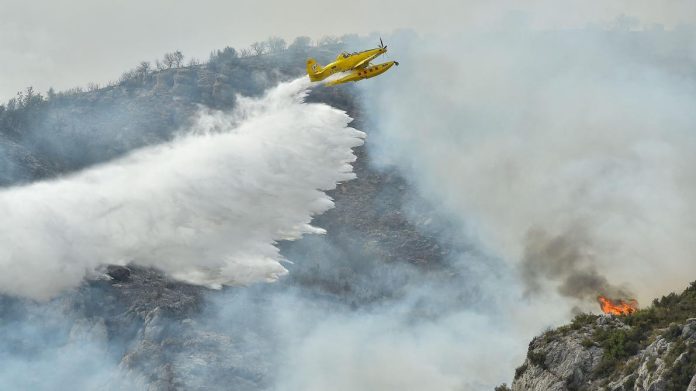 A heat wave of unprecedented speed sweeping southern Europe for several days should extend further across France on Saturday, while in Spain, firefighters are still fighting multiple fires. Italy is also not untouched by high temperatures.

The multiplication of heat waves in Europe is a direct result of global warming. Scientists say that greenhouse gas emissions increase the strength, duration and rate of repetition of heat waves.

Many festivals, sporting and cultural events have been canceled in French departments classified red, where school children and high school students were able to stay at home on Friday.

In Haute-Sane (East), ten students aged 10 and 11 suffered sunstroke at a multi-sport field near their school in Pin, where temperatures reached 35º.

During a visit to a retirement home in the south-west, French Health Minister Brigitte Bourguignon announced “we are in a very early heat wave episode, a strong episode that lasts a little longer than expected”, adding That “the hospital is clearly saturated, but meets demand”.

Public authorities have been particularly cautious for the past twenty years, learning lessons from the historic 2003 heat wave, which killed more than 15,000 people in France, especially among the elderly.

Homeless people also suffer from the dangers of dehydration. In Toulouse (south-west), the Red Cross is organizing looting programs to distribute fresh water to them. “There are more deaths in the summer than in the winter”, underlined Hughes Juglare, a 67-year-old volunteer.

Farmers have to adapt. “I strike until 11:30 in the morning, and then I can work in the evening,” says Daniel Tofaloni, 64, a farmer near Elne (southwest). The temperature in its tomato greenhouse can reach 55º.

In many departments in the center of the country, the fire risk is considered “very serious”, with an increase in crop fires in fields.

In Spain, firefighters continued on Friday to fight several fires across the country, nearly a week in the grip of an extraordinary heat wave.

Due to a violent fire near the site, more than 3,000 people were evacuated from the Puy do Fu Spain amusement park in the center of the country.

According to regional officials in Castile and León, the most devastating fire burned about 9,000 hectares in the Sierra de la Culebra (north-west).

As the flames spread, more than 200 residents of this mountainous area near the border with Portugal had to be evacuated.

According to him, in the north-east of the country, hundreds of firefighters were fighting several other fires in Catalonia on “the most complicated day of the episode in terms of weather”.

According to officials, the fire destroyed nearly 1,000 hectares of forest near Baldomar in the province of Lerida. The prefecture said that in the neighboring region of Aragon, at least 1,200 hectares in the municipality of Nonaspe have been burned.

In northern Italy, Lombardy is preparing to declare a state of emergency in the face of crops threatened by a record drought and water is already being rationed in several towns in the Po plain. The region, which is home to important crops, is facing the worst drought in 70 years.

The United Nations (UN) on Friday called for “action now” against drought and desertification to avoid “human disasters”.