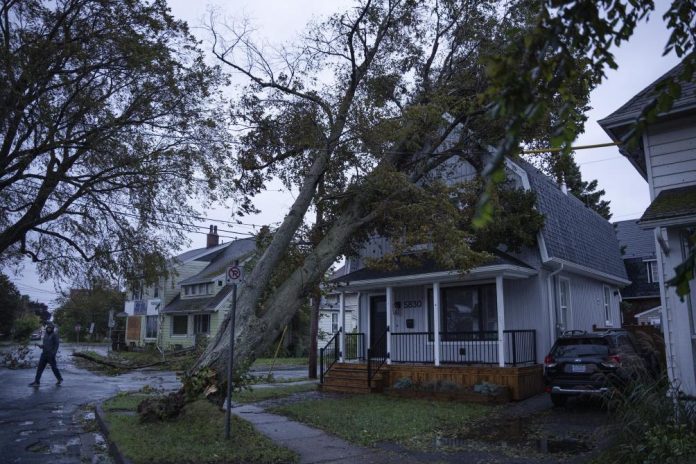 Nova Scotia Power, which supplies the province of Nova Scotia, where the storm made landfall in the morning with winds above 144 kph, for example leaving more than 400,000 customers without power at 2:00 p.m. GMT. . In the two other worst-affected provinces, 82,000 homes of the Prince Edward Island operator were disconnected from the network shortly before, and 44,000 of New Brunswick.

The US National Hurricane Center (NHC) warned of this “strong hurricane-force cyclone”, adding: “Significant impacts are expected due to high winds, storm surge and heavy rainfall”. Canada has issued multiple weather warnings for most of its eastern coast.

In its final bulletin published at 11:45 GMT, the Canadian Hurricane Center (CHCO) instigated winds of about 130 km/h in Nova Scotia, and notes that Fiona is moving to the north-northeast at 55 km/h. progressing from.

“Large waves have reached the east coast of Nova Scotia and southwestern Newfoundland, and they can exceed 12 metres,” he said. The US NHC told him that at 1:00 pm GMT the storm was over the Gulf of St. Lawrence.

Police in Charlottetown, Prince Edward Island, said on Twitter: “We have never seen such weather conditions.” “It’s unbelievable, no electricity, no wifi, no network,” the city’s mayor Philip Brown confirmed on the public channel Radio-Canada.

“A lot of trees have fallen, roads have been flooded a lot,” he said. “This will certainly be a historic and extreme event for eastern Canada,” warned CCPO meteorologist Bob Robichaud in a press conference on Friday.

The prefecture of the local community of Saint-Pierre-et-Miquelon on Thursday warned against “very strong winds” and “very strong swells”, and called for the “greatest vigil” residents of the French archipelago in the Atlantic Ocean was.

Officials in the Canadian province of Nova Scotia have asked everyone to stay indoors and pack enough supplies for at least 72 hours.

Prime Minister Justin Trudeau asked everyone to “take the right precautions”. In Halifax, stores ran out of propane gas refills for camping as locals rushed to stock up.

“Nothing serious” in Bermuda

Fiona passed about 100 miles from Bermuda on Friday after wreaking havoc in the Caribbean. The storm gusted up to 160 km/h and rained heavily in this British territory of about 64,000 inhabitants, located in the middle of the Atlantic Ocean, but reported no casualties or major damage.

“There has been some minor damage to our premises, but nothing serious,” Jason Rainer, the owner of a souvenir shop in the capital, Hamilton, told AFP. The region, located a thousand kilometers from the United States and accustomed to hurricanes, is one of the most isolated places in the world, making any evacuation in the event of an emergency nearly impossible.

So the main island took the preparations seriously. Buildings and homes must also follow strict construction regulations to withstand storms.