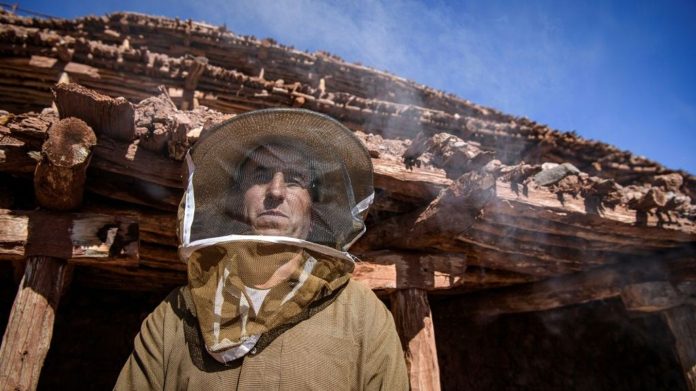 At the foot of the monumental apiary of Injerki, in the southwest of Morocco, silence has replaced the buzz of bees.

Silence synonymous with ecological disaster resulting from the disappearance of colonies. According to experts, a phenomenon seen nationally due to exceptional drought and climate change.

As is family tradition, 90 of his hives – he lost 40 in less than two months – are kept in Injerki’s beehive, in the heart of the Argan Tree Biosphere Reserve, one of the country’s richest.

,Other families have decided to give up beekeeping due to lack of resources.”, testifies Mr. Chatoui.

considered as “Oldest and largest traditional mass bees in the world“This site, dating from 1850, is not the only one affected by the mortality rate of Hymenoptera, according to experts.

Other Moroccan regions are affected. ,The Beni Melal-Khenifra region (centre) alone has caused substantial damage, with an estimated 100,000 hives since August.“Mohamed Chaudani of the Moroccan Beekeepers Association (UAM) is concerned.

Such is the extent of the disappearance of bees this year that the government has released 130 million dirhams (over 12 million euros) in aid to beekeepers.still not posted“, according to Mr Chaudani – and launched a comprehensive investigation into the disaster.

,This abandonment of hives is an unprecedented phenomenon in Morocco“Notes the National Office for Food Security (ONSSA), in charge of the investigation, which is responsible for climate change”colony collapse syndrome“. ONSSA excludes disease hypothesis.

Bee science researcher, Antonin Adam, supports them as an explanation for the worst drought in 40 years to affect this North African country.

In addition to this, “Drought can now be exacerbated by bees becoming vulnerable to diseases, infections, intensive farming practices, but also the country’s desire to increase its honey production“, analyzes the scientist who studied the beekeeping environment in the south-west of Morocco.

According to the Ministry of Agriculture, with a turnover of more than one billion dirhams (101 million euros), honey production in 10 years has increased from 4.7 tonnes in 2009 to about 8 tonnes in 2019.

For beekeeper Brahim Chatoui, “Drought is a normal cycle. Its intensity is worrisome today,

In Injerki, the disaster is twofold: ecological but also heritage.

From afar, the tavern is striking for its structure, which is both simple and complex, made of earth and wood on five levels divided into compartments of equal size. Inside the boxes are cylindrical holes made of woven reeds wrapped in mud mixed with cow dung.

But reaching out to see the extent of disrepair is enough. Parts of the beehive – recently listed as a national heritage – are collapsing, raising fears of a worst-case scenario.

For Hassan Benalayat, a researcher in human geography, tavern degradation is the result of several upheavals in the area, notably the modernization of the beekeeping sector and rural migration, but also global warming.

Earlier 80 families had deposited their bees there, today there are only twenty. ,It is imperative to bring this extraordinary legacy to life” Request Mr Benalayat.

,The situation is dire but that doesn’t mean I’m going to give up“, assures Mr. Chatoui who has formed a union with other villagers to protect beekeeping.

He struggled to incorporate it into the Moroccan heritage. They planted aromatic herbs to counteract the dryness of the soil, and now the bees are attempting to resettle.

,The purpose is not honey, but above all that the bees are protected and my bees survive while waiting for better days.“, hopes the beekeeper.