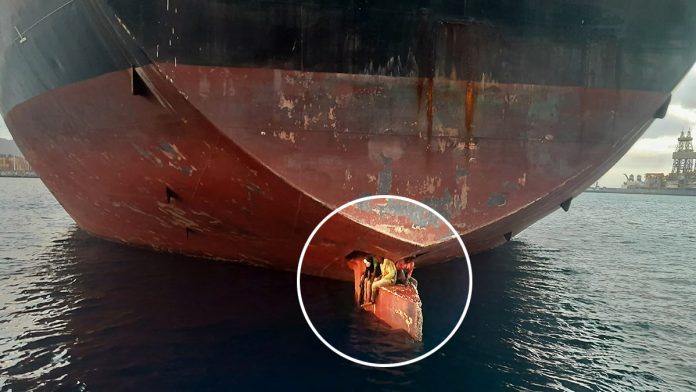 Three Nigerians, who arrived in the Spanish Canary Islands on Monday after spending 11 days in the deep sea hidden on the hull of an oil tanker, have finally been able to apply for asylum, Spanish authorities announced on Wednesday.

So the tanker will be able to go without them, according to the Canary Islands, off the coast of Africa. Spanish authorities, however, indicated on Tuesday that these three illegal migrants had been handed over to the owner of the tanker, who according to them had a legal responsibility to bring them back to the boat’s port of origin, which was condemned. by many NGOs.

The ship, flying the Maltese flag, “Alithini II”, had left Lagos in Nigeria on November 17 before arriving at the port of Las Palmas in the Canary Islands on Monday. An impressive picture released by the Spanish maritime rescue services and picked up by several media shows the arrival of the three men, sitting at the huge helm, their feet just above the water, on the 183m long and 32m tall ship are below the link. meter wide.

Upon their arrival in the Canary Islands, these three men “were tired and showed signs of hypothermia” for whom “they were cared for by health services“, the maritime rescue services told AFP on Monday. They also presented “moderate dehydration“, underlined the emergency services.