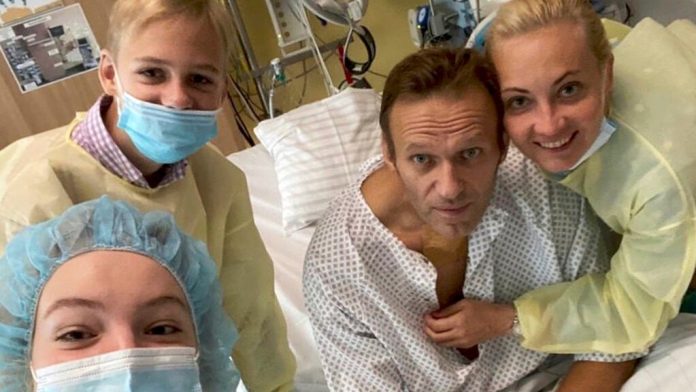 One of my oldest friends in Russia is a retired senior lecturer in English, who lives in St. Petersburg. Many years ago he asked me:

– Do you know why Russians hate Gorbachev?

– Because he destroyed the empire.

– No. Because he was the first Russian leader since Nicholas II to openly show that he loved his wife.

I was thinking of him when I read the issue of the New Year’s Independent Novaya Gazeta. Yuliya Navalnaya, wife of Russia’s most famous opposition leader Alexey Navalny Is named one of the Russian heroes of this year. In late August, she struggled with beaks and claws to obtain permission for her husband, Alexei Navaniz, to travel to Germany for treatment. He was in a coma, Poisoning by the neurotoxin Novitjok. Navalnaja finally managed to obtain a permit.

She incarnates The classic Russian so-called decisive wife – the woman who supports her husband through all conceivable difficulties and struggles extremely hard for him. (Concept dekabristka Born after 1825 when the Russian authorities, the so-called Derabristes, launched a failed uprising against Tasar. His wives, the so-called dekabristki, abandoned social life in St. Petersburg and followed him into exile in merciless and cold Siberia.)

Novaya Gazeta has written how “the beautiful and brave Navalnaja managed to defeat the novice”.

– She is a beautiful woman, no politician, she does not care about weapons or vaccines. She is just his wife and the mother of his children, Novaya Gazeta writes in a text that would be the greatest possible tribute in the Russian context: a woman who meets expectations.

But the question is: Is the picture correct? It is true that Julia Navalnaja has lived at home with children and has taken care of the ground service for the last twenty years. At the same time, there is no indication that he is apolitical – on the contrary. On her Instagram profile, Navalnaja often urges her followers to scare, take a political stand and participate in demonstrations.

“I am proud of all I met today in Towerskaya”, she writes in connection with a performance she attends on September 9, 2018.

Navalny himself has reiterated that Julia is a far more radical politician than herself.

– You call me a fanatic. If you were listening to Julia when she was discussing politics, you would understand that I am a very liberal politician, Alexei Navalny told famous Russian journalist Yuri Dud First interview He gave when Novitjok was poisoned.

Fallow Navalnij Post select pictures of her family life on Instagram and participate in a performance together.

– Everyone is trying to tell me that I wish Alexi would leave politics. But i don’t I support him hundred percent and want him to continue. I don’t like half measures, says Julia Navalnaja in a Dude interview.

Navalny himself often pays tribute to his wife in public. A 2018 tweet summarizes their declarations of love: