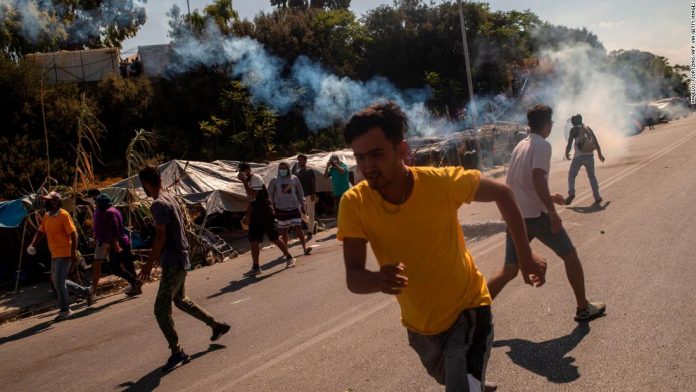 The migrants were protesting on the main road connecting the town of Mytilene Island and the location of the new camp, which will then be arranged by the authorities. Moria camp This was provoked earlier this week.

Greek police said on Saturday that “the use of tear gas to disperse protesters had been confirmed,” adding that there had been “minor clashes” between police and protesters. ”

About 300 migrants from the new camp were relocated to the building on Saturday, police said.

A reporter on the ground said the migrants were frustrated with being in refugee camps and wanted to leave the island, but the Greek government said on Friday that they would not be “blackmailed” into migrating.

The fire in Moria was deliberately ignited after quarantine rules were imposed on residents who tested positive for coronavirus in Europe’s largest refugee camp, Greek officials said.

One protester was moved to tears and was angry about his treatment in the camp.

Immigrants shouted “Freedom!” And placards reading “No Tents, No Lesbos, No Greece,” “We Need Peace and Freedom” and “Moria Killed All Lives.”

Tensions have risen four days after a fire broke out in Moria, Europe’s largest refugee camp, displacing 13,000 people, including thousands of children.

Refugees from the camp have been left homeless and hungry in the flames, sleeping on some roads and gas stations while dozens of families have taken refuge in nearby cemeteries.

Constantinos Costakos, director of the Greek Immigration Minister’s Office, said authorities would temporarily relocate about 1,000 migrants – especially people from weaker groups – to a ship at Sigri on the west side of the island.