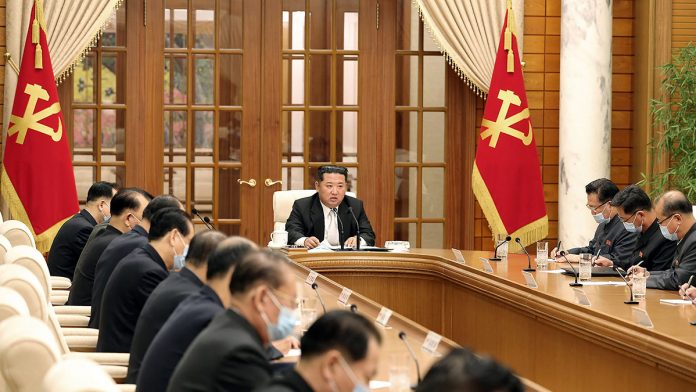 North Korean leader Kim Jong Un ordered nationwide “lockdown” measures after the country detected its first case of Covid-19 since the start of the pandemic, according to state media on Thursday.

Mr. Kim “Called all the cities and counties of the country to organize labor and production after carefully delimiting their areas and separating each work unit, each production unit and each housing unit from each other”, to prevent the spread of “Malicious Virus”said the official KCNA news agency.

Experts say the country’s faulty health system will struggle to cope with a major outbreak, especially since North Korea has failed to vaccinate any of its 25 million people, prompting requests from the WHO, China and Russia for vaccinations. The proposals have been rejected. Vaccines need to be accepted through the WHO Covax program “Transparency on how vaccines are distributed”Go Myeong-hyun, a researcher at the Asan Institute for Policy Studies, told AFP. “That’s why North Korea rejected it.”

North Korea has long claimed its ability to keep the virus at bay, and had not reported a single confirmed case of COVID-19 to the World Health Organization. According to the organization, North Korea conducted 13,259 anti-Covid tests in 2020, all of which turned out to be negative.

During a military parade in 2020, Kim Jong Un thanked civilians and soldiers for their loyalty and staying healthy in the face of the global pandemic. State media had already mentioned the measures “Pandemic Prevention”And civilians have sometimes been seen wearing masks in official photographs.

But during a massive military parade in Pyongyang in late April, broadcast by state media, none of the thousands in attendance were seen wearing masks.